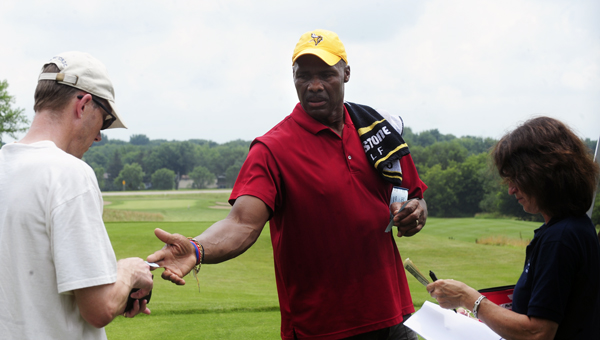 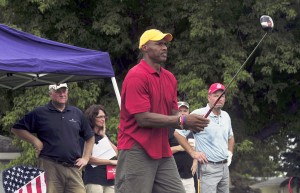 Matt Blair showcased his power in the long drive competition. His longest drive early in the afternoon traveled about 340 yards on the 353 yard par 4, falling just short of the green. -- Garrett Wampler/Albert Lea Tribune

For the past three years, Freeborn County Arc has been in charge of organizing the event that raises money for people with disabilities. This year the tournament brought out 27 teams of four players, and about 25 volunteers for the event.

“Helping people is what brings me back out here and it’s golf too, so it’s even better,” said Blair, who played in six Pro Bowls and two Super Bowls during his 12 year-career, all with the Vikings. “You come out and support events and good things happen.”

Last year Blair was stationed at the hole-in-one challenge but this year he was able to showcase his power in the long drive competition. His longest drive early in the afternoon traveled about 340 yards on the 353-yard par 4, falling just short of the green.

One of the main reasons Blair returned to the event was because of Kellen Kaasa, a 29-year-old man with Down syndrome. Kaasa plays in this event every year, and this year is no exception.

“Kellen is a friend of mine,” Blair said. “He’s just a special Minnesota athlete.”

Arc is the main beneficiary of the event. They do advocacy and support for people with disabilities.

Jo Lowe, the director of Arc, said they make sure everyone has the same opportunities in work, education and other freedoms. 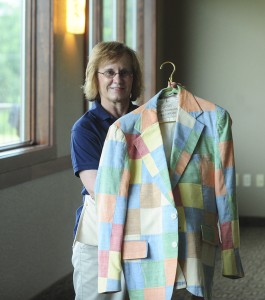 Jo Lowe holding the Sparky jacket, a cotton blazer with colorful patches, was once worn by former Minnesota Twins manager Frank Quilici to the Sparky tournament. The jacket has raised more than $9,000 for the event. -- Garrett Wampler/Albert Lea Tribune

“We’re a United Way agency but the Sparky golf tournament supports many of our functions,” Lowe said.

Cedar Valley Services, who helps with employment opportunities for people with disabilities, also benefits from the tournament.

There were also opportunities for the players to help raise money through mulligan cards, hole-in-one, beat the pro and a marshmallow drive competition.

Blair is actively involved in many charity events including his own Matt Blair Classic golf tournament, which has benefited the Special Olympics for the past eight years. He has also worked with the DARE program, the National Multiple Sclerosis Society and an event to raise money for lung cancer research.

His most interesting charity moment came in the lung cancer event. He raced a quarter-horse at Canterbury Park. Blair ran 100-meters and the horse ran a quarter-mile.

The Sparky jacket, a cotton blazer with colorful patches, was once worn by former Minnesota Twins manager Frank Quilici to the Sparky tournament.

He caught so much flak for wearing the multi-colored jacket that he decided to auction it off. It’s been auctioned every year since. The winner of the auction gets his name and year stitched to the inside of the jacket.