‘Some may say it’s a real gem’ 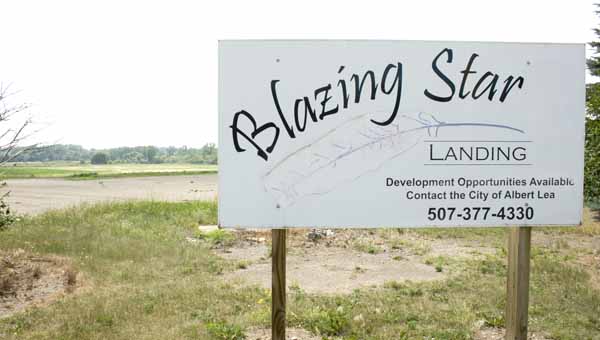 The site of the former Farmland Foods plant is now called the Blazing Star Landing. A sign sits at the corner of Garfield Avenue and Main Street explaining it is available for development. -- Sarah Stultz/Albert Lea Tribune

Editor’s note: This is the last in a three-part series looking back on the Farmland Foods fire of July 8, 2001, in Albert Lea. 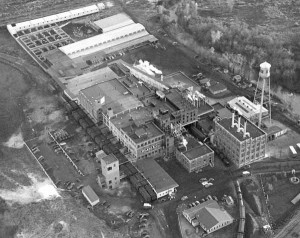 The plant, known in 1940 and 1941 as Wilson & Co., is seen here from an aerial photo. -- Photo courtesy Freeborn County Historical Museum

In the years that have passed since the Farmland Foods fire in 2001, it has become a topic of conversation: What will come out of the land that has held such an important role in Albert Lea’s history?

While several ideas have been presented, the land — at the corner of Main Street and Garfield Avenue — continues to sit vacant 10 years later.

Albert Lea Mayor Vern Rasmussen said the city has not received any offers on the land, other than one from Walgreens years ago when the business was looking to relocate to Albert Lea.

Rasmussen said the development of the land is something that should not be rushed. 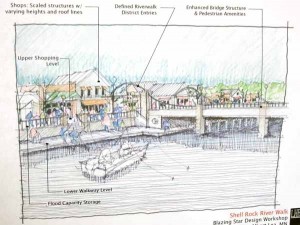 This rendering included a redesign of the channel area between Fountain and Albert Lea lakes. -- Submitted photo

“In my opinion, I don’t want to make a mistake with that piece because I think it is important to our community’s future,” he said. “For me right now as green space, I don’t feel like it’s hurting us.”

According to Albert Lea’s comprehensive plan, the objective for the site — which is now known as the Blazing Star Landing — is to redevelop it for a destination-oriented use that compliments the city’s downtown.

Rasmussen said the vision for the space also includes somehow implementing a public and private partnership together, through something like a small park. It would also include a connection to the Blazing Star Trail and somehow connect the past with the future.

Rasmussen said the question that has to be asked is if the community is willing to put money into the project or if the city wants a private developer to do so. 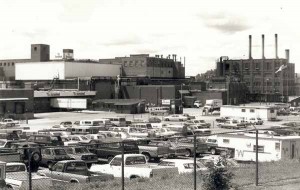 The meatpacking plant, known by many names throughout the years, was seen as Farmstead in this photo in 1986. -- Photo courtesy Freeborn County Historical Museum

“I understand that to the community, this piece of land is very important to us,” he said. “Some may say it’s a real gem.”

He noted that he would like to see a private development first before the public portion comes into play.

‘Are we willing to wait?’

Albert Lea Economic Development Agency Executive Director Dan Dorman said he thinks the community still isn’t sure about what it sees as the “highest and best use” for the property.

Dorman said if the community sees the best use as something nonindustrial, then the space will probably remain open until the economy improves and the lake quality improves. 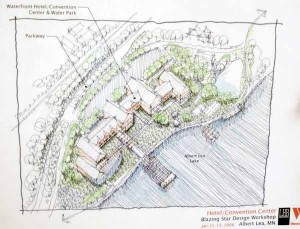 This proposal for a portion of the Blazing Star Landing includes a waterfront hotel and convention center, along with a parkway near Albert Lea Lake. -- Submitted photo

Dorman said if a developer comes to town wishing to bring a project to the Blazing Star Landing, the community needs to ask itself first whether this land is the best place for the project and would it be the highest and best use for the land.

It would benefit Albert Lea whether developers moved forward with a project in this space or somewhere else in the city.

While the land includes resources such as access to two rail lines, the space is somewhat confined, and it might limit other opportunities, he said.

Dorman and Rasmussen said they think the community needs to be realistic about what to expect — a portion of the land is also in a flood plain.

Albert Lea Community Development Director Bob Graham said what ultimately happens to the land will be a combination of being sensitive to what the site can physically support and being sensitive to the community’s needs, while also supporting the downtown. 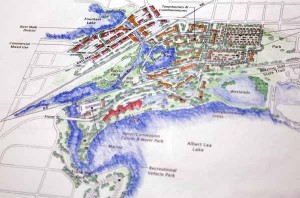 Out of Albert Lea Listens came the general consensus that the site was not the place for another industrial plant, Graham said. Other ideas have also come forward.

“Anybody we ever used was excited about the possibilities of this site,” Erdman noted.

Erdman said when he was in office, then Gov. Tim Pawlenty also came to look at the site and was impressed with the vision.

At that time, he said, the vision for the property was to make it a gathering place.

He said the public needs to step up and say they want the site developed and make it a priority. 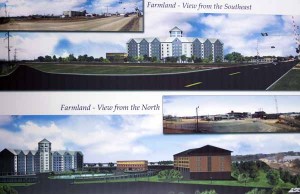 This idea for the former Farmland Foods site was created by Albert Lea City Planner Bob Graham and SEH consultants. The plan was incorporated keeping soil conditions in mind and involved a family friendly hotel, event center and another hotel. The design picked up historical connections to the former Farmland buildings. -- Sarah Stultz/Albert Lea Tribune

“You need to show people that you’re willing to reinvest and move the community forward,” Erdman said. “It needs to be a big community effort.”

He said while he felt the window of opportunity for redevelopment of the site was open in the couple years after the fire, he thinks that window can open again.

“The right combination of things fall into place, and it could be a beautiful thing,” he said.

He challenged the community to make it a community priority to move forward with the site.

“That packinghouse did a lot for the community, it really did.”