For at least three decades an odd light fixture which may look like a large letter Y with two arms has been at the corner of South Broadway Avenue and Pearl Street. On each of the arms is an attachment that once contained long fluorescent bulbs. 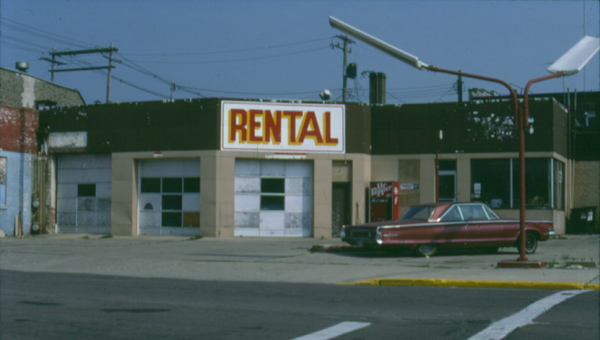 This photo was taken in 1989 by the late Bidney Bergie. At that time the former service station site at the corner of South Broadway Avenue and Pearl Street was evidently available for a new occupant. In the right foreground is the odd light fixture that’s still at this corner. -- Photo courtesy Freeborn County Historical Museum

This particular light is not a part of the city’s street light system. At the present time it stands alone on a corner lot that’s empty except for parked cars from Monday through Friday.

Some people have suggested that this particular light fixture was part of service stations and auto-related businesses once located at the corner. This is based on the fact that a gasoline station was built at this corner around 1910 by Dr. A.W. Watland as part of the new Motor Inn Co. In later years the corner became the location for the Broadway Service Station, followed by a business operated by Joe Patton.

Just after World War II, this place became Dolan Motor Sales. The owner was Mark “Shanty” Dolan, the manager of the Albert Lea Packers baseball team. A listing in the city directory said the Dolan firm was a dealer for Kaiser and Frazer automobiles, tires and repairs and operated a gas station. 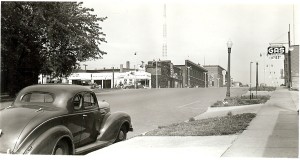 Here’s a 1941 view of Broadway Avenue looking north. On the left is what was then a Mobilgas service station at the Pearl Street corner. In the center is the transmitter tower for Radio Station KATE, then located in the middle of the next block to the north. On the right are curb cuts for a Bonded Gas service station. The sign indicates a gallon of ethyl premium gasoline was on sale there for 17.9 cents, plus maybe a few cents for state tax. -- Photo courtesy Freeborn County Historical Museum

As a Mobilgas station, the operators had the names of Ackland, Dahl, Larry’s (Neilsen), Hershey and Uptown. After 1980 the place became Vosburgh Machine and Parts, Ace Body and Sales and finally Evenson Auto Repair. Some time during those later years the present light fixture was installed.

Yet, two photos in the archives of the Freeborn County Historical Museum don’t show this particular fixture at the corner in 1941. And that’s part of the mystery. Just when was this fixture put in place?

One possible answer can be found in the files of the Albert Lea Inspection Department. In 1980 a portion of the building and property at 422 S. Broadway Ave. was remodeled. Those same files also show the service station and garage structure was demolished in 1997, except for the present Y-shaped light fixture. 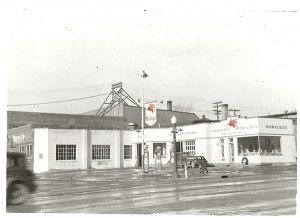 Here’s a closer look at the Mobilgas service station as it appeared in 1941. Two details worth noting are the street light at the corner, plus a nearby water hydrant. It’s obvious the present light fixture at this corner was installed at a later date. -- Photo courtesy Freeborn County Historical Museum 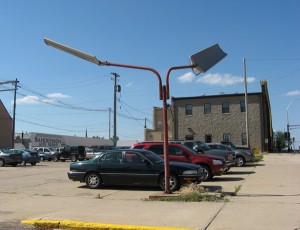 The only reminder that a service station and later several car-related businesses were located at the corner of South Broadway Avenue and Pearl Street and across from the Freeborn County Government Center is this light fixture. -- Ed Shannon/Albert Lea Tribune