Students in Jerry Bizjak’s eighth-grade geography and 12th-grade economics classes during the upcoming school year will get a taste of how people in Germany and Japan live life in their countries.

Bizjak just returned from the two foreign nations with a plethora of interesting facts.

“I don’t have jet lag or anything, but I’m still getting my feet back on the ground here in Albert Lea,” Bizjak said.

Over the past few years Bizjak has taken the opportunity to apply for and be granted trips abroad through various institutions. During the trips, he can take in the sights, sounds and culture of the areas to teach his students firsthand knowledge. 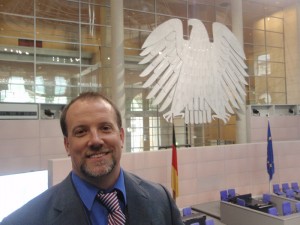 Jerry Bizjak at the German Bundestag, which is similar to the U.S. House of Representatives. -- Submitted photos

This summer he spent two weeks in Germany, returned to Albert Lea for a day and a half and then departed for Japan for another adventure. In the past Bizjak has visited Israel, China and South Africa.

Bizjak will teach his classes based on the personal experiences he has had this July. He explored historical sites and popular businesses; he also had the chance to view the cultural and economic sides of these countries.

“We have to create lessons based on what we saw and did,” Bizjak said. “Mine are going to be on the economics side.”

He said he believes Germany has done well in the recession and Japan has kind of “muddled” its way through the era. He had the opportunity to learn the characteristics that caused the particular reactions from each country.

The Albert Lea teacher also visited five schools as a part of the international route. He said the Japanese kids had a hard time communicating unless they were talking about sports, entertainment or superstars. 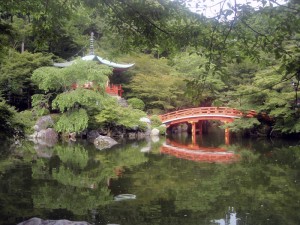 A Buddhist temple outside of Kyoto, Japan.

An unusual fact is that the Japanese students had to help clean their own schools. Bizjak said this was common in the area, and you could see it in other places in the community as well.

While he was in Germany, he was able to take tours of famous businesses like BMW and also got to take in some more humble sights such as the Berlin wall and the Dachau concentration camp. Dachau was known as Germany’s first concentration camp and held an estimated 200,000 prisoners.

“For me the 20th century world history stuff is what stood out the most,” Bizjak said.

His favorite place in Japan was seeing the Hiroshima Peace Memorial. The structure was the last building standing after the U.S. dropped one of two atomic bombs on Japan, bringing an end to World War II. More than 70,000 people were killed instantly, and another 70,000 suffered fatal injuries from the radiation.

Bizjak also had a unique dining experience while he was in Japan.

“One of the meals we ate was at this incredibly fancy restaurant and we had nine courses, with 10 different foods in each course,” Bizjak said. “In Japan, it’s all about presentation and appearance so it was just all of the colors we could imagine. A lot of seafood and soy-based products.”

His trip to Germany was funded through the Goethe Institute, which consists of both public and private German funding. Bizjak was joined by 15 other teachers on the trip. The Keizai Koho Center privately funded his trip to Japan along with 10 other teachers from the U.S.