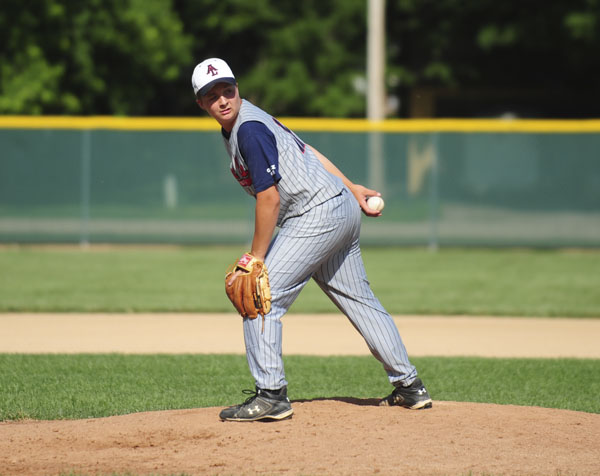 Poor hitting and missed opportunities spelled doom for Albert Lea VFW post 447 on Wednesday evening at Hayek Field. The Tigers fell to Faribault VFW 1562, 4-1. to drop to 7-10 on the season.

Faribault (5-2) pitcher Nate Emge emerged as the victor in a 1-0 pitching duel that lasted through five innings. Mistakes in the top of the sixth inning allowed Faribault to score the go ahead runs.

“It was a tight game until they scored those few runs,” Albert Lea manager Derek Fleek said, after the game. “They were battling the whole game and weren’t hitting the pitcher.”

With two outs and one runner aboard Faribault’s Mitch Struve laced an RBI single past the Tigers defense, scoring the runner at second. Struve advanced to third on the throw setting him up to score on another Faribault single.

Albert Lea would score their lone tally of the ball game in the bottom of the frame when Makael Lunning drove the ball to center field. Ethan Abben was able to make it home from second base.

Faribault tacked on another run in the seventh inning.

Scoring began in the first inning when Faribault’s Danny Pierce drove in teammate Tanner Tousignant on a double to right field.

The Tigers had a few opportunities to score the tying run in the ball game. In the bottom half of the first inning, the Tigers loaded the bases with one out. Dakota Wangsness struckout swinging at the dish and Zach Bordewich grounded out to the third baseman bringing a close to the inning.

Fleek said he feels his team needs to become more aggressive at the plate and not watch so many pitches go by, that way they won’t have to work from behind in the count.

“He pitched a good game,” Fleek said of Enderson’s performance. “We just didn’t make the plays we needed to.”

Enderson made it through the top of the second and third innings while only facing four batters in each frame. Then he went on a streak by recording three and outs during the fourth and fifth innings, before surrendering the two runs in the sixth.

Lunning made one of the defensive plays of the game in the fourth inning. The center fielder made a diving catch on a well hit ball to shallow center field. Lunning showed off his speed and quick reflexes to make a play on the ball.

Emge pitched a complete game allowing only five hits and one run. However, the Faribault pitcher had a few control issues and walked four batters, three of which were in the bottom of the first.