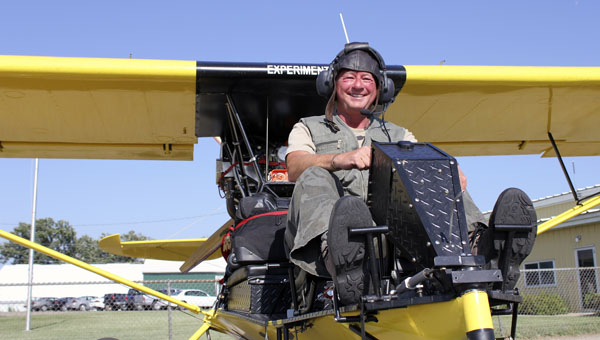 Sanford Reim sits in the cockpit of the Super Breezy at the Albert Lea Municipal Airport. Reim is delivering the plane to Juneau, Wis., to customers who purchased the aircraft from Yakima Aerosport. -- Garrett Wampler/Albert Lea Tribune

On Wednesday night, friends and family gathered on the tarmac at the Albert Lea Municipal Airport to welcome back former resident Sanford Reim to town and get a peek at the plane he is delivering to Wisconsin, the Super Breezy.

Albert Lea is one of the last stops on Reim’s trek, which has brought him from Yakima, Wash., across the Rocky Mountains, through the Black Hills of South Dakota and will end in Juneau, Wis. 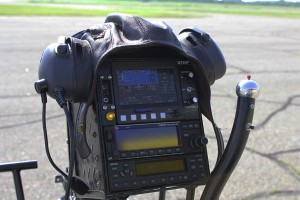 The model is equipped with state-of-the-art electronics including digital GPS systems and all equipment that displays all of the other pertinent flight information. -- Garrett Wampler/Albert Lea Tribune

“I have always been adventurous all my life, and I saw this opportunity and I couldn’t just pass it up,” Reim, 57, said. “It’s a huge deposit in the bank of memories. You can’t buy this experience at any price.”

What is more remarkable is the aircraft the Albert Lea native is piloting on this cross-country adventure. The Super Breezy is a two-seat experimental airplane produced by Yakima Aerosport. It is powered by a 180-horsepower Lycoming engine with a four-bladed pusher propeller.

Following the completion of day four of his five-day trip, Reim had already been covered in sun and wind burn. His attire consists of a helmet and mask along with a pair of safety glasses, which double as a windshield, and protect him from the wind. He also fastened the bottom of his pants with safety wire to prevent them from blowing away. It is the same safety wire which usually locks bolts from falling off of the airplane.

He said the sights that aviation have allowed him to see are just remarkable. On Sunday, he was flying high in the Rocky Mountains wearing his snowmobile suit and gloves. 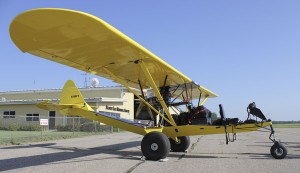 The Super Breezy is an experimental plane developed in Yakima, Wash. Reim has been carrying a SPOT tracking system so people can follow his path from the ground. -- Garrett Wampler/Albert Lea Tribune

“I was quite comfortable above the snow line,” he said. “To see the tops of the Rocky Mountains and to almost put my hands it, and to see the elk and antelope in their natural environment is just something you cant possibly see in any other vehicle.”

Reim said the nicest thing about the plane is that all of the equipment is behind him while he’s flying and he has an unobstructed view of everything around him. One of the downsides to the propeller being located behind Reim is that he can’t navigate with a map or take a drink of water because if he lost any items, they would go through the propeller.

“This thing is only on here for one reason and that’s to keep the pilot cool,” Reim said. “You ought to see them sweat when it quits.”

The design of the aircraft is an older design in aviation and is based off of the Breezy model. It is an open cockpit plane, with one electronics tower assembled on the front of the aircraft. The model is equipped with state-of-the-art electronics including digital GPS systems and all equipment that displays all of the other pertinent flight information.

Reim said the plane flies fairly slow about the same speed as a car drives. He has been maintaining an average speed in a tailwind of abut 75 knots, which is about 84 mph. Every one to three hours he stops at an airport to stretch and refuel the plane.

He hasn’t had any major problems because he said good people built the plane in Yakima and they are very professional. Reim planed to have the plane delivered to the customer by the end of the day on Thursday.

Through his experiences on this journey he said he has met the nicest people in the United States on this trip. One man even offered to let him drive his truck overnight at one of his stops.

“I also had two red-tailed hawks fly with me,” Reim said. “It was just cool.”

The pilot now lives in Yakima with his wife, Diane, but made sure he stopped in his home town to see his sister, LouJean Ingham.

“My sister lives here and I’ve got to stop here to pick on her every once in a while,” he said.

Reim began flying after he graduated high school in 1973. He said one of his school teachers called him with the offer two weeks after his graduation. She asked him if he wanted to learn how to fly and he told her he couldn’t afford that. She told him they were looking for someone to work at the airport in exchange for flight lessons.

His training and local beginnings came full circle when he landed the yellow Super Breezy on Wednesday. He said when he first learned how to fly at the Albert Lea Municipal Airport the plane he learned how to fly in was also a small yellow aircraft.