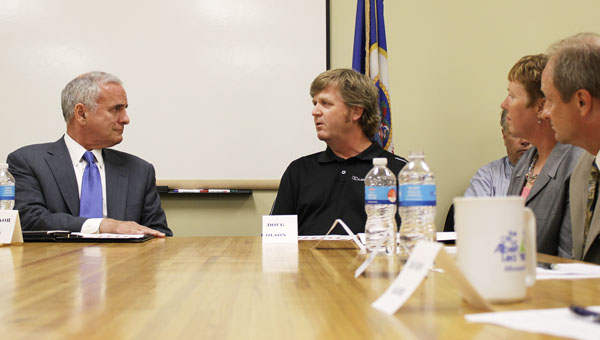 Dozens of Albert Lea business leaders on Wednesday urged Gov. Mark Dayton and state legislators to get back to negotiations and find a budget compromise to end the state government shutdown.

During what was a roundtable discussion with the governor at the Albert Lea Business Development Center, about 58 people gathered to express how they are being impacted by the shutdown and to encourage protection for different programs in the budget. 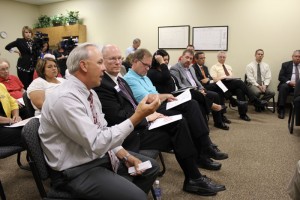 “Get the deal done, but remember a bad deal is worse than no deal,” said Dan Dorman, executive director of the Albert Lea Economic Development Agency, who organized the event.

Concerns about everything from local government aid protection and creation of jobs to support for higher education and state licensing were expressed. Wednesday marked the 13th day of the state shutdown.

Representatives from both the public and private sector were present, including city and county officials, economic development officials, education leaders, chamber representatives, business owners, among others.

“We need to reinvent government — make government look a whole lot different than it has in the past,” Murray said, urging support for reform.

While Dayton issued a few comments, he spent a majority of the meeting listening to concerns. 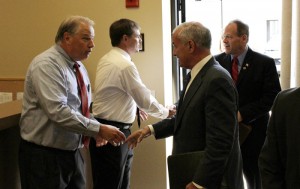 “I think it’s imperative we get the job done,” Dayton said. “I’m not going to stop until we get this resolved.”

The state shutdown began July 1 after Dayton and Republican leaders were unable to find a compromise on the budget deficit.

Since then, Dayton said, he has tried to meet with legislators to work on a new deal but has not been taken up on that offer. He noted he has also sent several budget offers to the Republican leadership that have been rejected.

Poppe encouraged Dayton to be “a man of steel” when making tough budget decisions and to remember that he is representing the entire state.

Dayton’s Albert Lea visit was one of several around the state the governor is making this week. He is gathering input about the effects of the shutdown.

With LGA making up one-third of the city’s budget, Rasmussen said that reductions or eliminations in this funding would cause dramatic cuts in services or dramatic property tax increases. 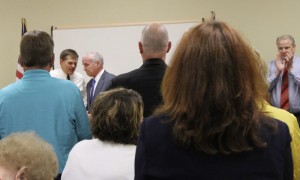 “LGA puts us all on an equal playing field,” he said, noting that cities like Albert Lea would lose more businesses to cities in Iowa because of increased property taxes.

ALEDA board member Keith Fligge urged the construction of a bill that would provide similar incentives as the Jobs Opportunity Building Zones program, which has helped bring more than 600 jobs to Albert Lea.

Chamber Chairman Doug Olson said he would hate to see the home-grown businesses in Albert Lea move across the border to Iowa because of higher taxes and less incentives.

Nate Jansen of Albert Lea Select Foods talked about the success their business has made under the JOBZ program and asked the governor to consider support of a similar incentive jobs program.

Several in attendance spoke of the importance of higher education, especially in preparing people for the workforce.

Poppe, who is also a counselor at Riverland Community College, said she has seen the emotional and psychological effects the shutdown is having on people.

Some students who are or will soon be completing programs through the college won’t be able to get a job because they haven’t been able to get the proper licenses, added Terry Leas of Riverland Community College.

Freeborn County Director of Human Services Brian Buhmann said he’s been planning for the state shutdown since May 23.

While many areas of his department have been deemed essential in a shutdown, there are still 11 of his employees — as of Wednesday afternoon — that are still going to be laid off because of the effects of the shutdown.

“I’ve had to give out layoff notices,” Buhmann said. “I’ve had to do what every manager doesn’t want to do. It’s very difficult and very personal.”

Jerry Ehn of Mayo Clinic Health System in Albert Lea said while he was happy to see the list of services that are being deemed essential under the shutdown, he is concerned about how limits on re-licensing will affect the hospital and clinic with bringing in new physicians and nurses.

In the construction realm, 2nd Ward Councilor Larry Baker talked about the impact the shutdown has had on his job and of others in his industry. With state inspectors not being able to perform their jobs, much of the process of new houses and renovations are put on hold.

“I talk to a lot of people, and people are scared,” Baker said.

Susie Petersen, director of the Albert Lea Convention and Visitors Bureau, talked about the effect the shutdown has had on the tourism industry and pleaded for the governor and legislators to work together.

Some of the most notable effects of the shutdown on tourism are in the closure of the state parks and rest areas.