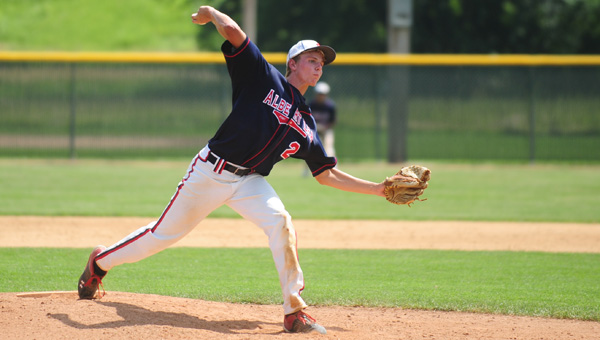 The Albert Lea Post 56 baseball team advanced to the District 1 championship game Saturday with a little help from the Rochester Red Hawk’s defense.

The Tigers scored its first three runs off three errors by  shortstop Lincoln Goetting and led 5-0 after the second inning. Those sloppy plays early set the tone for the game as the Tigers dominated the Red Hawks en route to a 12-2 win in eight innings.

Aaron Klatt, who’s getting used to pitching with a lead, earned the win for the Tigers. The right-handed senior allowed four hits through seven innings and has now allowed one run in 15 total innings for the tournament. Klatt wasn’t as dominant as he was Tuesday against the Rochester A’s when he struck out 14 batters, but his defense played well behind him. Klatt pitched to contact, walking four and striking out three, and the Tigers’ defense made some spectacular plays.

In the bottom of the third, Rochester’s Christian Rosenow hit a pop fly into foul territory behind first base. The Tigers’ first baseman Cody Haaland chased the ball and made a diving catch for the out. Haaland made another diving catch in the seventh with a runner on second base when he dove to his right, fielded the ball and beat the runner to first base for a force out.

The Tigers led 5-0 into the bottom of the third inning and the Red Hawks never came close. Rochester’s catcher Steve Serratore scored the Red Hawks first run on a towering 370-foot home run to center field. The Red Hawks’ second run came in the eighth inning with the Tigers leading 12-1.

The Tigers built a 6-1 lead in the fourth inning during a two-out rally. With two outs and the bases empty, Abben singled to center field and stole second base for the second time before Connor Kortan walked. Klatt then doubled to left field to score Abben.

Makael Lunning went 2-for-4 for the Tigers and singled to start the sixth inning. Lunning stole second base and moved to third off a single by Dylan See-Rockers. Abben then hit a sacrafice fly to right field to score Lunning and give the Tigers a 7-1 lead.

The Tigers put the game out of reach in the eighth inning off Red Hawks reliever Bill Belch. See-Rockers led off the inning with his second single of the game and Abben walked. See-Rockers was picked off at second base and Kortan fouled out for the second out. Then the two-out hits kept coming.

Klatt walked and scored on a two-run double by Cole Sorenson down the left-field line. Haaland singled to score Sorenson and moved to third off a double by J.T. Bellrichard. Tyler Woodside walked to load the bases, and Lunning walked on a 3-1 count to score Haaland. Houston Sharpe took the plate for the first time in substitution for See-Rockers when Bellrichard scored the inning’s fifth run on a wild pitch. Sharpe nearly keep the inning alive with a sharp liner that was caught by a diving first baseman.

Haaland relieved Klatt in the eighth and allowed one run on a hit batter.

Kortan said the key of the game was two-out hitting. The Tigers scored eight of its 12 runs with two outs and got five two-out hits among plenty of walks.

Klatt has been the Tigers’ most valuable player through three District 1 Tournament wins. On the mound, Klatt has thrown 15 innings in two games, allowed one run on eight hits and struck out 17 batters. He’s also 7-for-10 at the plate with four RBIs during that span.

With the exception of Thursday’s win over Winona, the Tigers have dominated its opponents from mound and hit well in every game. The Tigers’ have outscored its opponents 38-9 through three games.

“I think our attitude is it’s the last go-around for a lot of these older kids,” Kortan said. “They want to finish strong. In their high school seasons they wanted to go a lot further than they did so it’s their last shot.”

The Tigers will play either Owatonna, the Rochester Patriots or the Red Hawks in the District 1 title game at 1 p.m. Sunday at Hayek Field. The Tigers need one more win to advance to the state tournament for the first time since 2008, and its opposing team must beat them twice to advance.

Kortan said Sorenson, who had a rough outing on Thursday, will start Sunday for the Tigers if he’s up for it. Klatt, Woodside and Haaland will be available to pitch, too.

Carter Kortan played for the first time Saturday since suffering a knee injury during the wrestling season. Kortan played third base during the eighth and final inning. Jack Kortan said Carter is hitting the ball well and playing sound defense but is a liability once he reaches first base.

“I don’t want him clogging up the base paths,” Jack Kortan said.