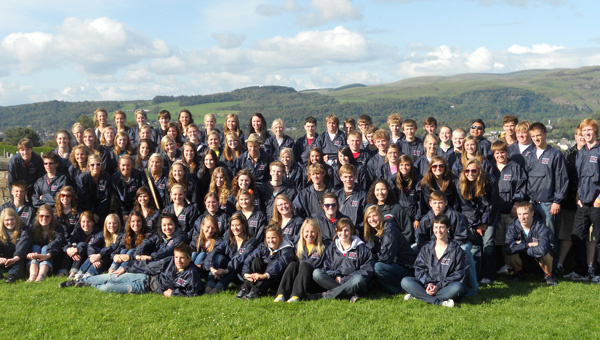 The trip was about to begin — finally! With fundraising beginning in March of 2010, extra evening rehearsals, individual preparation, meetings with parents and lots of anticipation, the choir trip to England and Scotland was at hand. A total of 92 students from Albert Lea High School in ninth- through 12th-grade and 56 parents, grandparents and other adult chaperones left in the second week of June.

The group was on three different flights leaving Minneapolis. Two groups changed planes in Chicago while the third left later and made a stop in Iceland. Two thirds of the group traveled together the first day by coach bus while the remaining group did the same itinerary about three hours behind the first group. The first stop was Windsor Castle where we saw the beautiful state rooms with amazing art and furnishings, the famous Queen Mary’s Dolls House furnished with miniatures including tiny real flushing toilets and real wine in the wine cellar, and the Chapel of St. George which has the graves of the Queen Mother and King George. The group got to witness the changing of the guard there, however, the royal band playing an ABBA tune seemed a little odd!

The next stop was Stonehenge, and the group walked around the formation equipped with audio guides to provide all the information needed about the structure. It was fun to be in such a famous place surrounded by sheep pastures and rolling green hills. We ended our first long day in Bath. All travelers reunited at the hotel and enjoyed a group dinner at a local restaurant. The students enjoyed watching some local breakdancers practice at the courtyard of the restaurant, and most people really enjoyed the chocolate bread pudding for dessert! 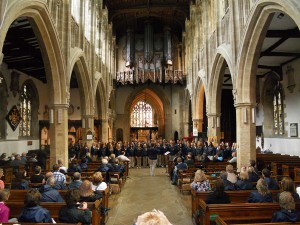 Albert Lea High School choir students got chances to sing in cathedrals and beside Loch Lomond lake on their trip to England and Scotland.

The group traveled on three coach buses with able guides Kaare, Lawrence and Sue and talented bus drivers Tony, Tom and Javid. The guides provided incredible historical knowledge to everything we saw and the drivers added humor and amazing driving skills — especially crazy for us driving on the left side of the road. The Roman bath was the first stop on Wednesday morning in the city of Bath and most also toured the Bath Abbey church. Viewing something so amazing that was built 2,000 years ago was a new experience! Next we drove through the Cotswold area on the western side of England next to Wales which has rolling hills, charming villages and lots of sheep and cows. We had a lunch stop at a quaint little town called Bourton on the Water and then we were on to the city of Stratford. The choir gave their first performance at Holy Trinity Church, a beautiful structure and the place where William Shakespeare is buried. The adults on the tour got their first thrill when the choir started to sing in the ringing acoustics of the church. A few locals and several other tourists were thrilled to hear the ALHS group and several asked if we had any CDs to sell of the choir. The group walked the streets of Stratford to see Shakespeare’s birthplace and school and then had some free time for shopping and dinner. The group met and attended a violent and bloody performance of Macbeth at the newly remodeled Royal Shakespeare Theatre.

Thursday morning we left Stratford and traveled to the lake district of England. We had some travel sickness but arrived safely at Grasmere near beautiful Lake Windermere where the group had a quick lunch stop. After a long bus ride we arrived at Stirling, Scotland. It was a beautiful evening, and we all trekked through an ancient cemetery and up the hill to the outside of Stirling Castle. The view was gorgeous and many photos of the group were taken. We sang that evening at The Church of the Holy Rude very near the castle — another amazing cathedral and unforgettable performance. After singing the group found dinner downtown and then checked in at the dormitories of Stirling University. They were pretty basic rooms, noisy halls and the showering facilities were not so great — but eventually everyone made the best of it.

The breakfast the next morning included a typical big English breakfast buffet (eggs, mushrooms, fried tomatoes, baked beans, sausages, bacon and toast) and we were off to another busy day! We drove to Edinburgh and visited the Edinburgh Castle — home to the Scottish crown jewels and the Stone of Scone which is used in coronations for British monarchs. We just happened to be at Edinburgh Castle on Prince Phillip’s 90th birthday, who is the Duke of Edinburgh. They were preparing for a 21-gun military salute with the big guns off the castle turrets. The choir sang at St. Giles Cathedral, just a short walk from the castle. They sang for many other tourists and visitors after a brief 11 a.m. prayer service. Some of the comments the Albert Lea parents heard were “amazing” and “breathtaking.” Other people could not believe that this was a high school group; they thought they sounded like a touring college choir. After the concert there was free time to explore the many shops and restaurants on the Royal Mile, which is the street between the castle and Holyrood Palace. After getting back on the bus we drove to Loch Lomond. This is a popular resort area nestled in hills and fields. The choir did an impromptu performance on the banks of the lake of the song “Loch Lomond.” Another beautiful day and for many this was a highlight moment of the trip! After our short time at the lake, we went to downtown Glasgow for dinner and then back to Stirling for sleep.

The next morning we woke to another beautiful day, but the weather soon changed to rain. We left Scotland and drove along the North Sea to Alnwick Castle. This is the private residence of the Duke of Northumberland, but they open it to tourists. St. Cloud State University also has a study semester at this estate. Parts of the “Harry Potter” movies were filmed there. On our way to the next destination we made a short stop at a portion of Hadrian’s Wall. This was a wall built by the Romans to divide England from east to west. Although we were impressed by its age, the particular portion we saw was not large and provided an opportunity for comedy. Someone compared it to our Plymouth Rock — not very impressive! After another long bus ride the rain miraculously cleared, and we arrived at Fountains Abbey. This is a ancient ruin of a monastery and cathedral now turned into a lovely park. The students had a great time exploring and climbing especially after a rainy bus ride. The next stop was the city of York. We checked into the hotel in the midst of noisy celebrations on the street following the horse races and each group found their own dinner.

Sunday morning was again a beautiful day, and many of the group attended services at York Minster. The bells were welcoming us as we walked about 15 minutes to church and attended a very high ceremonial service of the Church of England. Coincidentally the Minster choir sang an anthem that our choir was singing on tour. The guides led the groups on a late morning city walking tour. York is a medieval walled city with many twists and turns, shops and restaurants. The rain arrived and the temperature dropped. Many spent the day shopping, visiting museums or resting. That evening we were taken on a ghost walk which explained why York is considered one of the most haunted cities in the world. By the end of the walk we were wet and could see our breath as it was so cold.

The next morning the Albert Lea choir sang at York Minster — one of the largest Gothic cathedrals in northern Europe. Once again there were many wonderful comments about the choir, many tourists videotaped the whole concert, and compliments were given to the adult chaperones. We boarded the bus for the long journey toward London. The freeway rest stops in England are called services and getting 150 people fed and watered in 30 minutes is quite a feat! Our next stop was Cambridge, the city of about 35 universities. We walked to the center of town near Kings College Chapel and had a brief snack and shopping time. We then went to evensong service at King’s Chapel and enjoyed the architecture, the choir, and the famous paintings and monuments. After church we drove to London and checked into a youth hostel hotel. The rooms were small and some bunked six or eight to a room. The noise in the hostel that night was due to other groups of students from Spain and Portugal, so it was a short night for some.

Tuesday morning we started our day with an orientation bus tour of London. London is a busy city and is also getting ready for the Olympics next summer. There is a great deal of construction and preparation for that event, which is causing traffic delays and congestion now. The group spent some time at the Tower of London, saw the crown jewels, the execution spot, lots of armor and the famous ravens. The group ended the tour at Convent Garden where we split into smaller groups for lunch and explored the city on our own. Some shopped, some explored the subway, viewed Buckingham Palace, St. Paul’s Cathedral, Westminster Abbey and Parliament. The evening was spent at a West End show. Everyone chose either “Lion King,” “Phantom of the Opera,” “Wicked,” or “We Will Rock You.” After a scary loss and find of a kid on the subway, everyone had a great evening!

The last day of our trip, Wednesday, was a free day for groups do to whatever they wished. The weather was again perfect for traveling, and the students found their interests. Some went on a river cruise on the Thames, some went on the giant London Eye Ferris wheel, some went to museums and others shopped and walked the streets. Everyone found their way to the London Bridge tube stop and Southwark Cathedral for our final performance. The students sang brilliantly to a very congenial crowd. Several tears were shed as the last performance ended — especially for the seniors in the group. We ended our evening at the Hard Rock Cafe with burgers and thank you speeches.

The next morning was an early departure for two thirds of the group as we loaded our luggage on the bus at 4:45 a.m. and headed to the airport. The last third left later in the morning.

Many of the students expressed that this trip was life-changing and incredible beyond their imagination. Hearing our young people sing in those huge ringing cathedrals and seeing the reaction of total strangers to their music was a huge highlight for many parents, and there were not many dry eyes at the concerts. I am extremely proud of these students and am thankful to be their teacher. Thank you to everyone in Albert Lea who helped us make this trip a reality! You should be very proud of your young people. They were polite, respectful, cheerful and great travelers. They represented our school, town and country very well.