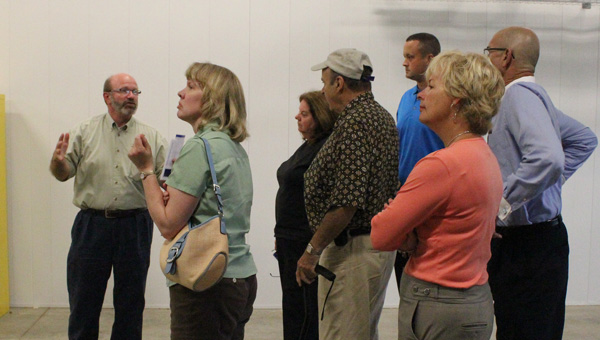 HARTLAND — Bent Tree Wind Farm landowners received thanks and appreciation at an event held at the operations center in Hartland.

“It’s a thank-you event for all the landowners to celebrate everyone’s partnership,” Pat Kampling, president and chief operating officer for Alliant Energy, said.

“I’d like to thank Alliant for the opportunity to have Bent Tree Wind Farm in Freeborn County,” Kluever said.

He gave a brief timeline of the four years of work involved before the wind farm became a reality. Kluever also said Alliant has proven themselves to be good neighbors and that the wind farm has been an asset for the county.

Sparks spoke about how Alliant had good communication with members of the Legislature, which helped the project move along. He also said as a member of the energy committee he’s glad to have affordable renewable energy.

“Minnesota has become a national leader and pioneer in renewable energy,” Sparks said.

Sparks also spoke about Riverland Community College’s wind energy technician program, which he said has already graduated its first class. He said the wind farm will be able to produce energy for a long time while also reducing pollutants.

“This certainly is a welcome addition to Freeborn County,” Sparks said.

District 27A Rep. Rich Murray, R-Albert Lea, attended the event and said the wind farm will hopefully bring additional income to the county, which will help in a tough economic time. Kaelberer, the site manager, said he was excited to have the landowners there to celebrate the wind farm.

“Thank you to everyone here who’s made this project possible,” Kaelberer said.