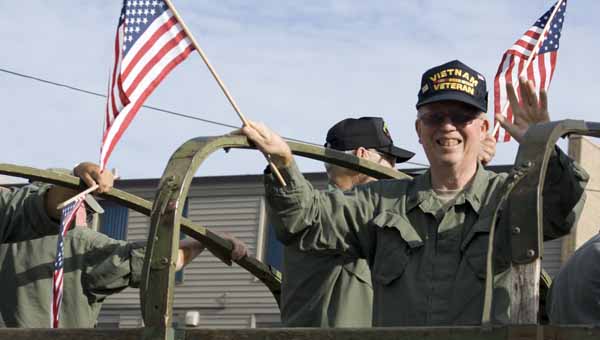 A Vietnam War veteran waves off the side of an open-bed cargo truck at the start of the Third of July Parade Sunday. -- Sarah Stultz/Albert Lea Tribune

By Garrett Wampler and Sarah Stultz

Horses, cars, tractors and floats made their way down Bridge Avenue and onto Fountain Street Sunday evening as the Third of July Parade presented itself to the onlookers in Albert Lea.

Friends and families gathered to enjoy one another and embrace in the city of Albert Lea’s Independence Day celebration. Children waved their flags in remembrance of the red, white and blue.

“We’re glad to be living in America,” Albert Lea resident Peg Kelly said. “This is our way of support.”

The crowd stood as a sign of respect as the veterans passed to begin the parade. As the past members of the armed forces passed the crowd, claps began to rise in appreciation for their efforts and dedication to service.

Eunice Hatleli was in the crowd as her husband, Duane, passed in the parade with the Veterans of Foreign Wars. Duane Hatleli served his country as a member of the Army.

Kelly and Eunice Hatleli are neighbors, and they came across one another before the parade. They used the time to talk and catch up with each other.

“We support the community, we support the veterans and everybody else that participates in the parade,” Eunice Hatleli said.

Many members of the crowd came with their families and used the parade as another way of spending time with their relatives. Jake Thompson was one of them. Thompson came to the Third of July Parade with his wife, Lydia, and his three children: Ian, 4, Emily, 2, and their 7-month-old daughter, Ellie.

“I enjoy hanging out with my family and watching all of the floats,” Thompson said. He also noted that his favorites are still the fire trucks.

Thompson said he has been coming to the parade for 26 years — each year since he was born.

“I think tradition is important to have in the routine,” he said. “We do it each year as a family.”

Pat Abrego and his wife, Judy, came to watch the parade because it has become a staple of their Fourth of July activities.

“We come out here every year for the parade,” Pat Abrego said. “We just come out to enjoy ourselves, get something to eat and watch the parade.”

Their favorite thing to watch in the parade is no longer around. The couple said they miss listening to the Albert Lea High School marching band.

“They’ve had it for many, many years and all of a sudden it’s gone,” he said.

Third of July Parade Co-Chairman Tom Jones said the parade had one of the largest crowds he’s seen in his 22 years of participation in the parade.

“The thing that amazed me was over at New Denmark Park there wasn’t anywhere to sit,” Jones said. “We had a beautiful night, a perfect night for a parade.”

There were 91 participants in the parade, including emergency personnel, nonprofit organizations and businesses. Sixty-nine were judged.

The grand marshal of the parade was Albert Lea resident Leroy Maas, known for his involvement as a coach and teacher at Albert Lea High School, the city recreation director and the originator of the Albert Lea Figure Skating Club.

The parade theme was “Freeborn County: Past, Present and Future,” and grand champion honors went to the Freeborn County 4-H Dog Show performers.

“The ones that won definitely deserved to win,” said Kari Fjeldberg, who judged the floats with her husband, Todd, and Sue Phillips. “They incorporated the theme well into their float.”