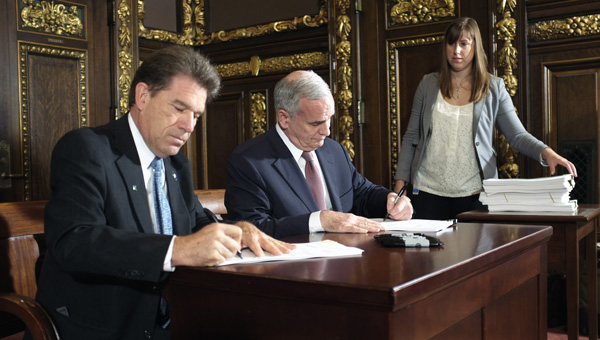 From left, Secretary of State Mark Ritchie and Gov. Mark Dayton sign budget bills on Wednesday as press secretary Katharine Tinucci stands by to hand the next bill to the governor. -- Submitted photo

ST. PAUL — Minnesota’s state government is poised to re-open for business after lawmakers worked through the night and agreed on a budget plan early today to end a nearly three-week shutdown.

The last votes came around 3:30 a.m. during a special session that begun Tuesday afternoon. Democratic Gov. Mark Dayton signed the budget in a ceremony that began at 9 a.m. today. His signature formalized an agreement he reached with key Republican legislative leaders last week and likely mean that most of the idled 22,000 state workers could be back to work by Thursday.

Those workers will re-open state parks, restart highway construction projects and turn the state lottery back on. They’ll also get back to issuing drivers licenses and permits for alcohol sales, and get dozens of other government services going again.

The shutdown dented Minnesota’s reputation for good government. Democrats and Republicans had for months argued bitterly over taxes and spending, and the impasse became a crisis when government shut down July 1 because no budget was approved.

In the end, Dayton gave up on tax increases but Republicans in turn agreed to soften spending cuts with $1.4 billion in new revenue by delaying state aid payments to schools and borrowing against future payments from a legal settlement with tobacco companies.

“This represents a compromise,” said Sen. Julianne Ortman, R-Chanhassen, as she argued in favor of the tobacco borrowing. “I think there are 201 of us plus a governor who would say this isn’t our best option on how to proceed, but it is the best option for bringing Minnesota government back to work.”

In less than 12 hours, lawmakers passed nine budget bills that together fund all major state operations. Individually, many of the bills stretched to hundreds of pages, leaving legislative Democrats to complain they were voting based on little knowledge of what was contained within.

While praising Dayton for agreeing to a compromise that would end the shutdown, Democrats — who were relegated to House and Senate minorities in last November’s election — said the Republicans’ decision to lean on tobacco borrowing and the school aid delay was delaying a permanent solution to Minnesota’s persistent budget deficits.

“It simply defers important budget decisions into the future,” said Rep. Frank Hornstein, a Minneapolis Democrat. He and colleagues complained that the bills would force tuition increases for college students, painful cuts to recipients of social services, pressure on local governments to raise property taxes and other consequences.

Legislative leaders and Dayton agreed before the votes began to limit the scope of the special session and lawmakers’ ability to tinker with the bills in an effort to keep the budget pact from unraveling once legislators get involved. The Minnesota Vikings’ longstanding push for partial public funding of a new stadium did not come up in the brief special session.

During floor debate, Republicans tweaked Democrats for voting against the only available option to end the shutdown. A vote against the budget bills “is a vote to continue the shutdown,” said House Majority Leader Matt Dean, R-Dellwood.

In addition to the nine budget bills, lawmakers approved a pension bill and legislation allocating dedicated sales tax money to outdoors and cultural programs. They approved a $498 million construction bonding projects bill that includes $51 million for a new physics building at the University of Minnesota, $42 million for a new science and engineering laboratory at St. Cloud State University, $50 million for flood control projects around the state, and $56 million for transportation projects with more than half to local bridge replacement and repairs.

While Democrats bemoaned the spending bills as not generous enough, some conservative Republicans had resisted to committing their support after months in which they insisted no new revenue was needed in the next state budget. But in the end, House Republicans held together on all the budget bills while Senate Republicans suffered only a few defections on a handful of the bills.

Dayton said Tuesday he was relieved to see an end to the shutdown on the horizon.