Driving to give back 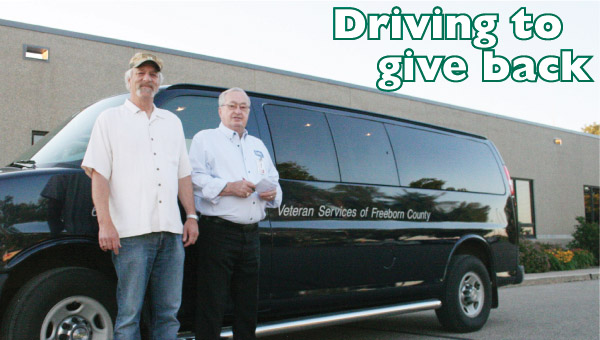 Donald Fredrickson, left, and Larry Pearson pose for a photo next to the van they use three times a week to drive veterans to medical appointments at the Veterans Administration hospital in Minneapolis. -- Kelli Lageson/Albert Lea Tribune

Every Tuesday, Wednesday and Friday a van leaves Freeborn County carrying veterans to the Minneapolis Veterans Administration Health Care System. This service is available to all veterans who have medical appointments and is free of charge. It also wouldn’t be possible without the help of two men who do all the driving.

Donald Fredrickson and Larry Pearson are those two men. Fredrickson has been driving the van for more than 15 years and said he likes being able to help the veterans who wouldn’t be able to get to their appointments themselves.

“They helped us and now we’re trying to help them,” Fredrickson said.

Pearson estimates the service has been available in the county for more than 25 years. Each day they take anywhere from six to 14 people in the van; veterans and sometimes spouses make up the passengers.

Leaving that early in the morning also means people can sometimes move appointments earlier. The van gets back at varied times depending on what time the latest appointment ends.

“They appreciate having the service,” Pearson said. 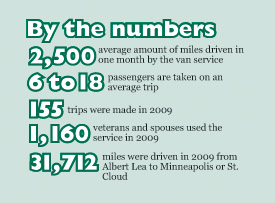 Both Pearson and Fredrickson said inclement weather rarely stops them from making the trip. In fact, unless the highways are closed they’ll be on their way.

Chester Dahl, 89, a veteran of World War II, was riding the bus on Wednesday. He said he rides the van every three months and has established relationships with the drivers and other passengers.

“It’s very nice you don’t have to drive or look for parking places,” Dahl said.

The van can also stop at the Gopher Stop in Clarks Grove or the liquor store parking lot in Geneva if needed. Reservations have to be made by calling 377-5184 to make sure there’s enough room in the van, and they do have the ability to take more than one van if enough people need the service. Veterans will also be driven to St. Cloud for special services, where they take a shuttle back to Minneapolis to meet up with the van that heads back to Freeborn County.

“As they get older they’re scared to drive in the cities and this way they have transportation,” Fredrickson said.