Dan and Deb Schatz, of Twin Lakes, announce the engagement of their son, Carl Schatz, to Brianna Johnson, daughter of Matt and Riki Johnson, Albert Lea. 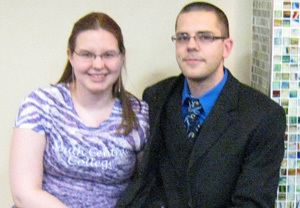 Grandparents of the groom are Vernon and Betty Schatz, of Lake Bluff, Ill., and Colleen and Robert (deceased) Nash, of Waukon, Iowa.

The bride is a 2009 graduate of Albert Lea High School. She is employed at J.C. Penny in Mankato.

Carl is a 2006 graduate of Albert Lea High School and will graduate from South Central Technical College, North Mankato in 2011. He is currently employed at Schmidts Meat Market in Nicollet.

A wedding is planned for July 23 at St. Theodore’s Catholic Church of Albert Lea.