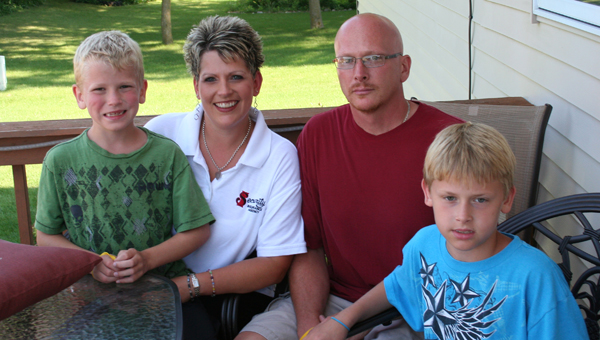 From left to right: Logan, Nicole, Todd and Brody. The Schumaker family sits outside on their deck. -- Nya Lony/Albert Lea Tribune

That wasn’t an easy diagnosis for Todd Schumaker’s family to overcome, but thanks to friends, Todd and his family were able to get through it.

“Don’t just remember the cancer survivor when they’re sick, remember them down the road when it’s over,” said Nicole Schumaker, Todd’s wife. “They need support the whole way through; you can’t get through this alone.”

Todd was diagnosed with medulloblastoma, a type of brain cancer, on Oct. 26, 2002. His tumor was classified as Stage 4 and had metastasized into his back, legs, hips and bones. Schumaker underwent brain surgery, chemo and radiation therapy, stem cell transplant and a bone marrow transplant.

As a result of his treatments and the support of his family and friends, Todd Schumaker survived. He has been chosen as one of the honored survivors of the 2011 Freeborn County Relay for Life, a fundraiser that benefits the American Cancer Society.

“It’s a privilege to be honored as a survivor,” Todd said.

His diagnosis came as a shock to his family. His sons, Brody and Logan, were only 3 years old and 3 months old at the time.

“What do you do when you’re told that you have a brain tumor?” Todd said. “I just knew that I had to be there. What keeps me going is my family.”

Todd’s wife, Nicole, has been one of his strongest sources of support.

“I just did whatever I had to do to make sure he was here with me,” Nicole said. “The doctors weren’t always optimistic, but I tried to keep him positive. I did everything I could to find the best care possible for him, even calling doctors in New York City and Dallas. I credit the wonderful Mayo medical facility for Todd’s being here with us.”

His stem cell and bone marrow transplant surgery required him to stay at a hotel near the hospital for 30 days until his white blood cell count went up.

He had to have someone there with him at all times, Nicole said. She couldn’t be there every day because she had to take care of the children and to earn an income.

“We asked for help and everyone was so willing to come. Our parents, Todd’s brothers, my brother and sister and our friends would take time out of their lives to come spend they day with him. They even came to help me with the kids when I had to work and helped with things around the house, like mowing the lawn. We are so thankful for their support.”

Both Todd and Nicole’s employers have been very supportive. He works at Minnesota Corrugated Box and she works at Security Insurance. She said the two employers have given them the time they need to attend follow-up appointments.

“They were so young in the beginning,” Nicole said. “They’re both aware of what’s happened now. They even wear their Livestrong bracelets every day.”

The Schumaker family is looking forward to Relay for Life this August.

“We rented a camper and we’re spending the whole weekend at the Relay,” Todd said. “I’m looking forward to being a part of everything out there.”