Funeral services for Gerald W. Heine, 80, of Conger will be held at 10:30 a.m. Wednesday at St. Paul’s Lutheran Church in Conger. The Rev. Daphne Hamborg will officiate. Interment will be at the Pickerel Lake Cemetery. Visitation will be from 6 to 8 p.m. Tuesday at Bayview/Freeborn Funeral Home and one hour prior to the service at the church. To sign the guest book, go to www.bayviewfuneral.com. 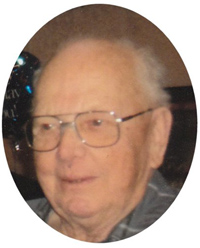 Gerald died Friday, July 15, 2011, at his home surrounded by his children.

Gerald Heine was born on March 28, 1931, in Freeborn County, the son of Fred and Bertha (Lutteke) Heine. He grew up and attended school in Conger. On Oct. 21, 1954, he was united in marriage to Lois Doyle at the Concordia Lutheran parsonage. The couple farmed in the Conger area for many years and moved into town in 1981. He was a member of St. Paul’s Lutheran Church in Conger. Gerald later worked for the Conger Coop Creamery as a truck driver and milk inspector. He enjoyed playing sports in his younger years. More recently he enjoyed playing cards, reading and listening to music. Gerald loved spending time with his friends and family, especially his children, grandchildren and great-grandchildren.

Gerald was preceded in death by his parents; wife, Lois; one daughter, Jayme, in infancy; and one son in infancy; brothers: Clarence and Lawrence; and sisters: Doris Larson, Lorene Behr and Juliann Riemer.