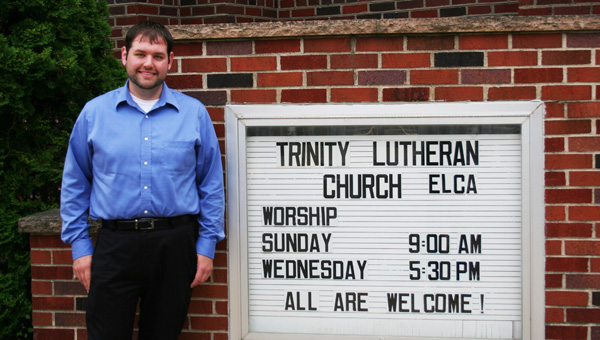 Growing up in Albert Lea, Joshua Enderson had always been involved in Trinity Lutheran Church. He attended Sunday school regularly, confirmation classes, sang in the choir and, when he became older, taught Sunday school. Enderson described it as his second home.

“It has always been a welcoming and encouraging place with loving people,” Enderson said.

There are a lot of people involved at Trinity Lutheran Church who have influenced and encouraged him, including Erna Berthelson, Bob Goldman, Arnie Biedermann and the Rev. Curtis Zieske.

“They’re good role models and some of them have been my teachers throughout the years in Sunday school and confirmation classes,” Enderson said. “They’ve been a good source of support and guidance.”

On Sunday, Enderson was ordained as a pastor at Trinity Lutheran Church. The ceremony began at 4 p.m. with a reception afterward. There have been two other ordinations of pastors from Trinity’s congregation: Kristi Kleinbeck on June 11 and Leslie Niest in December 2009.

After graduating from Albert Lea High School in 2003, Enderson attended Waldorf College in Forest City, Iowa, in pursuit of a pre-med degree. Halfway through his first year, Enderson changed his course of study, leading to him becoming a pastor.

“I realized that it wasn’t the right track for me,” Enderson said. “I started taking religious studies and decided it was what I wanted to do.”

Enderson has begun his job as the associate pastor at Grace Lutheran Church in Luverne.

“I’m excited to be involved in ministry again,” Enderson said. “In seminary, a lot of your time is spent studying instead of being with people. I’m ready to begin bringing the word of God to people.”

Many pastors start out in solo positions after their ordination; however, Enderson is an exception. As an associate pastor, he will be working alongside the lead pastor, the Rev. Ron Nichols, at Luverne’s Grace Lutheran.

“I’m excited to be working with another pastor,” Enderson said. “I look forward to learning from him, and it’s going to be great to have him as a colleague.”

Enderson began his move to Luverne, 150 miles away, on Monday. He hopes to visit his family in Albert Lea as often as he can.

“I’m excited to be going to a new place and a new community, but I will definitely remember the place I came from,” Enderson said.