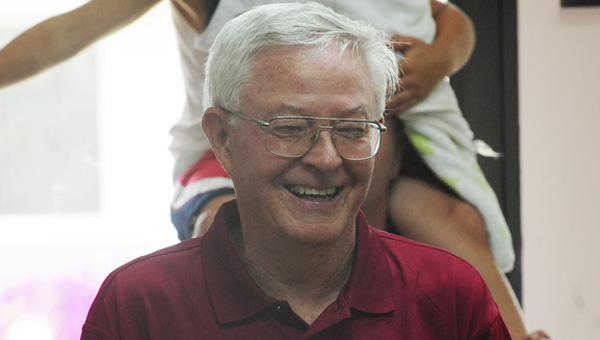 About 40 people packed the Alden Community Museum Sunday to honor one of the town’s most beloved figures. -- Andrew Dyrdal

About 40 people packed the Alden Community Museum Sunday to honor one of the town’s most beloved figures.

“Athletic directors work behind the scenes,” Pierce said. “Everybody assumes teams, referees and ticket holders just show up. It takes a lot of organization.”

Pierce started at Alden High School in 1963 and became athletic director in 1964. He said he enjoyed the job, especially working with colleagues from different schools.

“When you get an award like this you’re honored by your peers,” Pierce said. “They thought enough of you to feel you deserved this honor.”

Pierce was inducted into the hall of fame with one other former athletic director, but was unable to attend the banquet because he was on vacation in Florida.

Jim Beach, Pierce’s high school teammate, said “Neil was the same type of high school student in the 50s that he is now. He was very focused toward athletic sports even then. His skills and sports were defined by hard work and determination.”

One of Pierce’s college teammates, Gordy Thompson said “I do remember Neil as one of the nicest guys on the Gustavus Adolphus campus. I am proud to have known him and call him my friend.”

Potter then spoke and called Pierce a “confident, humble Christian man who is living his life like he played the game.”

“The skills and lessons he lived seemed to rub off on teammates, staff and fans,” Potter said.