Angie Von Rueden has accepted the position of marketing coordinator at KIMT. Von Rueden graduated from Clear Lake High School and continued her education at Waldorf College where she received a Bachelor of Arts degree in communication with an emphasis in electronic and print media. She was also a member of Alpha Chi Omega at Waldorf College. 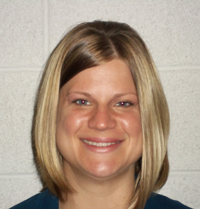 Von Rueden comes to KIMT from Verizon Wireless. She previously was an intern at KIMT in the production department and also worked as production tech. She will be responsible for editing and the production of marketing spots that promote KIMT.

Von Rueden and her son live in Mason City, Iowa.She can be reached at the station at 641-423-2540 or at avonrueden@kimt.com. KIMT News 3 is a CBS and a My Network affiliate in the Mason City, Albert Lea, Austin and Rochester market area and is owned and operated by New Vision Television.