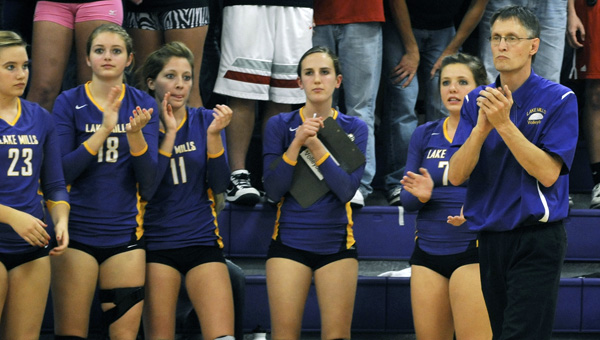 Boehmer led the Bulldogs to a school-record 45 wins last season and they were runner-ups in the state tournament. The Bulldogs graduated five seniors from that team as they look to win their eighth consecutive North Iowa Conference title this season. Here’s a Q&A with the coach:

Q: After having coached so many successful teams, how does last year’s team stand out?

A: The easy answer is wins and the tournament run we had, but all that was possible because it was such a competitive bunch of kids. They loved to compete and that made for some intense practice sessions and games. Playing on Saturday night in the state finals is a dream come true for a coach. I have been lucky to be in the finals as a competitor wrestling in high school, as an assistant wrestling coach in Lake Mills and now as a head coach for our volleyball team.

Q: Despite graduating five players you return arguably your best two. What makes Josie Brackey and Morgan Fjelstad such a great 1-2 punch?

A: No doubt about it, we lose a ton of talent. The five girls gone off of last year’s team will be tough to replace. The good news is we have three returning starters in Morgan Fjelstad, Josie Brackey and Shelby Kuper. We also return two juniors who saw some varsity action in Kelci Larson and Carlie Christianson.

Brackey and Fjelstad play a lot of volleyball together, and they have for years. If you want to be good at something do it. They have worked hard to find the timing that a good offense needs to run a quick attack. They push each other very hard at times. They are both very competitive and that has driven them both to succeed on the court.

Q: You’re playing for your eighth consecutive NIC title. How do you capture it?

A: As always, the title goes through Osage and Forest City. You have to beat them both to win it. If you drop a game to them to have to have help. Mason City Newman Catholic will be better as will most of the bottom half teams, as they all return some of their key talent. This year will be a better year for the NIC from a balance point of view. We only see each other one time in the regular season, so you have to set your goals at being 7-0 if you want that trophy. If we are going to compete with Osage we have to be able to play defense and transition to a quick attack. If they are playing defense all night, it should give us a great opportunity to win another NIC title.

Q: Lake Mills volleyball is known for reloading talent each season. What’s the main ingredient in a top-tier program?

A: I preach consistency and youth development. I expect my older players to coach our younger players. I am as worried about our middle school team as I am my varsity. You live in the moment but you prepare for the future. I also know that having the type of talent I have had over the years sure makes it easy. These kids love to play volleyball, and they take great pride in what we have accomplished here. Girls in Lake Mills grow up wanting to wear that varsity uniform someday. In our fourth through sixth-grade program this year, nearly 90 percent of every girl in those grades were on a volleyball team. That may be the best number we reached all year.

Q: Last season’s team handled the emotional highs and lows so well, how do you teach that?

A: A good play is determined by what the audience sees. You never know what is going on behind the curtain. We certainly had our highs and lows behind the curtain, but when it came time to play the game the competitive fire and desire to win was second to none. That is not always easy to do, but trying to understand each player helps. The coaching staff has stressed that we are team driven and not player driven. One person can never win a volleyball game but a team can.

Look for additional questions and answers in an interview with coach Boehmer in the Fall Sports Yearbook published Aug. 31.