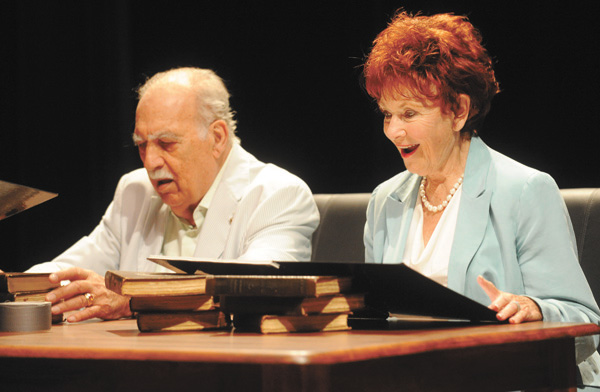 Marion Ross smiles with joy next to Paul Michael in June 2008 at the Marion Ross Performing Arts Center in Albert Lea. Ross and Michael were on stage looking over the books for “The Last Romance” for the first time. -- Brie Cohen/Albert Lea Tribune

Hollywood newspaper Variety reported Sunday that actor Paul Michael has died at the age of 84.

The Broadway musical performer and Hollywood TV actor succumbed to heart failure at Woodland Hills, Calif., on Friday. He was the longtime companion of actress Marion Ross, an Albert Lea native for whom the Marion Ross Performing Arts Center is named.

Michael was born in Providence, R.I. Survivors include Ross and sons Matt and Greg Michael.

Michael and Ross maintained a friendship with Albert Lea residents Arnie and Pat Mulso and invited them to their home, fondly called Happy Days Farm, in Woodland Hills in March 2009. Pat Mulso said Ross called her Monday morning and told her Michael “squeezed out every little bit of life because he lived and loved life.”
Mulso said during their California trip they walked along the Pacific Ocean and Michael prepared a dinner at the house.

“It was very nice. He and Marion were special people to us because they treated us like family,” she said. “They are one of those people who, as you meet and get to know them, you see how they got along because they just thrived on each other.”

Mulso said Ross will miss Michael. She said she is blessed to have her son and daughter, as well as his two sons, for comfort.

The blog Charles Ferruzza of The Pitch news website fondly remembered Michael in a post today. He wrote, “As a kid, many years before I actually met the actor Paul Michael, I was already a fan. Michael — whose acting career spanned over six decades and who had become a frequent performer at Kansas City’s New Theatre Restaurant — had played ‘King of the Gypsies’ on TV’s first gothic soap opera, ‘Dark Shadows.’ (A show that’s become such a cult classic over the last five decades that Tim Burton is creating a Johnny Depp movie based on the show).

“Although best-known for his many Broadway appearances, Michael loved being recognized for ‘Dark Shadows,’ ‘Frazier’ and ‘Seinfeld’ (he was featured in the popular ‘The Maestro’ episode).”

Ross and Michael performed the play “Love Letters” at the Marion Ross Performing Arts Center when the name was changed from Albert Lea Civic Theater in June 2008. In a tribute to Ross at the start of the dedication ceremony, Michael sang “The Impossible Dream.”

They also performed in Albert Lea in July 2006 during a celebration of the Albert Lea sesquicentennial, during which she was the grand marshal of the Third of July Parade. Ross, known for her 11-year portrayal of “Mrs. C” on “Happy Days,” gave the commencement speech to Albert Lea High School graduates in 2008.

Variety reported: “In recent years, he and his companion of 23 years, Marion Ross of ‘Happy Days,’ starred together in the Hallmark movie ‘Where There’s a Will’ and in theatrical appearances at San Diego’s the Globe and Kansas City’s New Theater in ‘Barefoot in the Park,’ ‘Love Letters’ and Joe DePietro’s ‘Over the River and Through the Woods.’ When playwright DePietro (Tony winner for best musical “Memphis”) saw them in his play ‘Over the River and Through the Woods,’ he was so impressed that he wrote for them ‘The Last Romance,’ which premiered in Kansas City and then opened the new theater in the round at the Globe last year.”

Ross stars in the Hallmark Channel Original Movie “Keeping Up with the Randalls,” which airs at 8 p.m. Saturday.