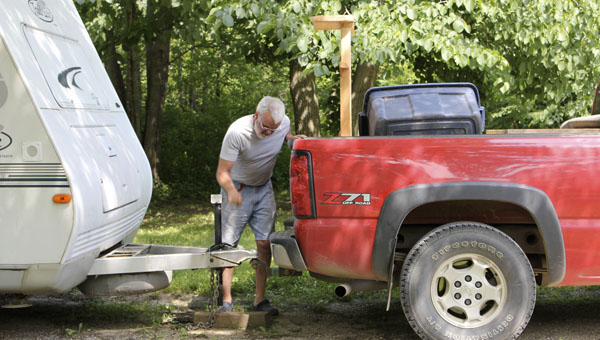 Jim Dolton of Alden connects his camper to the hitch of his Chevy pickup around 3:30 p.m. Thursday to be out of Myre-Big Island State Park before the campgrounds shut down at 4 p.m. -- Tim Engstrom/Albert Lea Tribune

Jim and Renay Dolton of Alden had hoped to spend their summer at the White Fox Campground at Myre-Big Island State Park.

It was close enough to home for Jim to go to work, and they thought the seasonal pass was a good idea for a way to relax this summer. 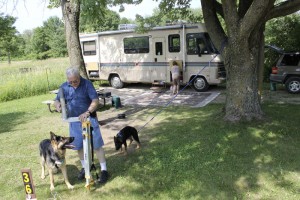 Around 3:30 p.m. Thursday, Wally Ress of Albert Lea takes down the stand that held a TV satellite dish. He and his wife, Lynne, were hosts at the White Fox Campground at Myre-Big Island State Park for June and had been slated to be hosts for the first two weeks of July. Their German shepherds, Neko and Sasha, watch him. -- Tim Engstrom/Albert Lea Tribune

But on Thursday, thanks to the park closing as a result of a state government shutdown, they had to pack up their camper and haul it and all their gear back to Alden. Renay said they wished they could get their pass refunded now so they could use the money to relocate to a campground that isn’t run by the state.

“We are out our summer vacation money until the state pays,” she said.

Myre-Big Island State Park closed at 4 p.m., along with state parks across Minnesota. That time is the usual one for when campers are expected to leave their sites.

Myre-Big Island State Park Ranger Jerry Katzenmeyer made the check of the White Fox Campground and Big Island Campground at 3:30 p.m. Thursday. No one was on Big Island and three camps were packing up at White Fox.

The Doltons were among them. So were Wally and Lynne Ress. They had been the campground hosts for June and had expected to be the hosts for the first two weeks of July.

“All negotiations are compromises,” Wally said, frustrated that the state leaders had let the state government shut down.

He didn’t like that the parks were going to lose $1 million in revenue by being closed and said the state needs to solve the budget gap by cutting back on spending. 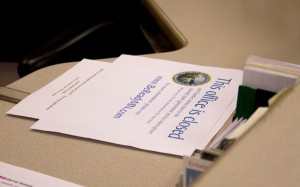 A sign sits on a desk at the Minnesota Workforce Center in Albert Lea Thursday afternoon. It was set to be placed on the doors of the center at 4:30 p.m. The office will be closed during the state government shutdown. -- Sarah Stultz/Albert Lea Tribune

He said he hopes they will be able to return to the park in a day or two.

Katzenmeyer said people who come to the park today will be greeted by a sign that says the park is closed.

No Department of Natural Resources staff will be present, but legally people can use the park during the day. It is illegal to be in the park at night.

Katzenmeyer advised against using the park at all because no DNR staff would be present in the event of an emergency.

House District 27A Rep. Rich Murray, R-Albert Lea, weighed in this morning on the government shutdown.

“I think there’s a lot of things that should be kept open,” he said. “It’s just plain stupid that we’re at this point. Why are we wrecking everybody’s weekend? It’s not like you have a big staff at all these parks. It wouldn’t take that much to keep it open.” 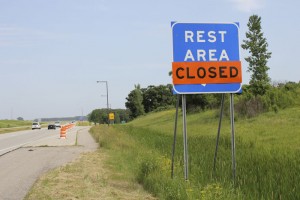 The rest area on Interstate 90 near Hayward was closed by 4 p.m. Thursday in anticipation of a state government shutdown. -- Tim Engstrom/Albert Lea Tribune

The Hayward Rest Area serving eastbound traffic on Interstate 90 was closed by 4 p.m. Thursday. Rest areas across Minnesota closed Thursday in anticipation of a state governtment shutdown. Signs informed motorists the Hayward Rest Area was closed, with orange barrels blocking the ramp entrance and barricade signs across the ramp itself. Barricades also blocked cars from entering via the exit.

Minnesota Workforce Development Inc. closed the doors of its workforce center in Albert Lea Thursday in anticipation of a state government shutdown.

Employees placed a sign on the door at about 4:30 p.m., advising people of the closure. At this point, the facility is expected to be closed at least Friday and all of next week.

People are being directed to www.BeReadyMN.org.

Lottery tickets will not be sold, validated or paid at any retailer until the state government resumes operations. Players with winning tickets are advised to keep them in a safe place until the lottery can restart. A list of frequently asked questions for the shutdown is available at the Minnesota Lottery’s website.