Ordean Allen Klingbeil, 82, of Bricelyn, died Wednesday, July 6, 2011, at Mayo Clinic Health System in Albert Lea. Funeral services will be held at 2 p.m. Saturday at North Blue Earth Lutheran Church in Brush Creek Township, Faribault County. Visitation will be from 4 to 7 p.m. today at Bruss-Heitner Funeral Home in Bricelyn, and will continue one hour prior to the service at the church on Saturday. The Rev. Donald Rose will officiate and burial will take place in Bricelyn Lutheran Cemetery, Seely Township, Faribault County. Bruss-Heitner Funeral Home in Bricelyn is assisting the family with arrangements. Memorials are preferred to the Bricelyn Swimming Pool, Bricelyn Fire Department or Bricelyn Ambulance. 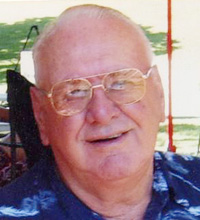 Ordean farmed in Brush Creek Township until 1995. He delivered Winnebago motor homes for 26 years. He owned a corn shelling business and picked sweet corn for the canning company for decades. He served on the school board, canning factory board, was a member of Zuhrah Shrine and was a member at North Blue Earth Lutheran Church. He enjoyed hunting and fishing in Canada, North and South Dakota, California, Alaska, Iowa, Florida, Colorado, Wyoming and Minnesota. He had his private pilot license. He loved to golf.