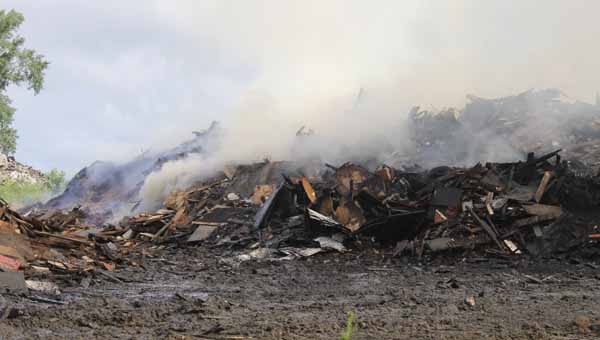 As of Monday morning, a pile of old wooden pallets that had caught fire at Peterson Excavating were still emitting flames. -- Garrett Wampler/Albert Lea Tribune 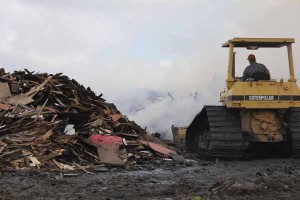 Anderson said the call of the fire came into authorities at 2:38 a.m. Sunday. Firefighters fought the blaze for 12 hours. The pallets had been in a large pile.

As of this morning, the cause of the fire is still unknown, and a team of investigators from Albert Lea will begin an investigation today.

The fire continued to smolder this morning.

Firefighters fought a blaze in a building of the company in May.

Peterson Excavating, which also does business as I-90 Recycling, is across the road from the Good Samaritan Society. While Good Sam is in the city limits of Albert Lea, Peterson Excavating is not. And there are only two fire hydrants at Good Sam.

Peterson Excavating and I-90 Recycling are owned by Mike Peterson.