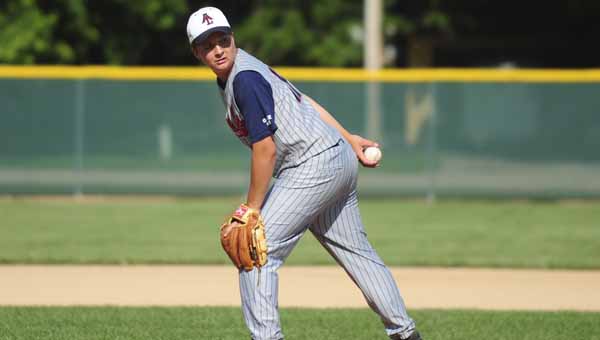 EDEN PRAIRIE — It has been more than 30 years since the Albert Lea American Legion Post 56 team has been in the state tournament, and they weren’t going to waste any opportunities. Aaron Klatt pitched a complete game allowing only four hits en route to a 5-2 victory over Lakeville North, but the Tigers fell 13-1 to host Eden Prairie in the second game of the night at Round Lake Stadium Field.

Two of the hits Klatt allowed against Lakeville North were scored in the top of the ninth inning. Great defense behind the pitcher was the key to the Tigers’ success. 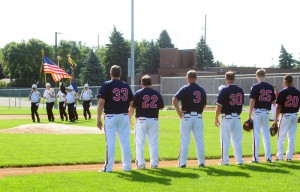 Albert Lea Amercian Legion Post 56 watches and listens to the National Anthem before their game against Lakeville North.

Klatt said the beginning of the game was a little rough on him, but his defense was able to pick him up. Two of the hits in the first inning looked to be headed over the fence but on both occasions center fielder Sorenson was able to make spectacular grabs up against the fence to save a few runs early on.

“The story though is Aaron Klatt,” Kortan said. “This is a top-notch team, and he only allowed four hits and two runs. He pitched great and got us to the next round.”

The Tigers didn’t waste any time jumping over Lakeville’s pitcher A.J. Moore. All five of Albert Lea’s runs came with two outs in each of their respective innings. Shortstop Ethan Abben began the scoring in the bottom of the second, and Post 56 led in the game from that point on.

Moore was sporadic with his throws early and often hitting five Post 56 hitters throughout the game. In the second, Lakeville’s pitcher walked Dylan See-Rockers to put two men on base when Abben came to the dish. Abben dug in and blasted a ball deep to left-center field over the head of the center fielder. The ball fell just in front of the outfield fence and enabled him to turn three bases while scoring the games opening two runs. 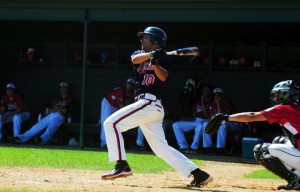 J.T. Bellrichard drove in a run in the bottom of the third inning. The hit landed in left field and Bellrichard was able to make it to second base.

Post 56 tacked on another run in the bottom of the third. Moore hit Cody Haaland with two outs, which set up J.T. Bellrichard’s RBI double to left field.

Lakeville pulled the game back within two runs in the top of the fourth inning. Evan Cordell connected on the opening pitch, driving a single straight back up the middle. Klatt walked the next batter, and both runners advanced a base on a loose ball at the plate.

Cleanup batter T.J. Evanson connected on the next ball to Bellrichard who delivered the ball to first for the easy out. However, Cordell was able to score on the play. Connor Kortan ended the inning after a quick throw to second to pick off the runner thinking about stealing third base.

The pick off was Kortan’s second of the day, the first came in a steal attempt in the top of the second.

With two outs in the bottom of the sixth inning, Moore connected with the back of Abben, sending the Tiger to first base. Abben stole second base setting him up in scoring position for Kortan, who delivered on an RBI single, which fell between two Lakeville players in left field.

Klatt then stepped to the plate and helped his own cause by delivering an RBI double, allowing Kortan to score from first base.

On the mound, Klatt didn’t face more than four batters from the fifth inning on until the top of the ninth inning. He recorded a first out strikeout, but then allowed consecutive singles and walked a batter to load the bases.

Jack Kortan took a quick trip out to the mound to settle down his starter and earn the final two outs of the ball game. Lakeville’s Zack Creighton grounded into a fielders choice but was able to score the runner from third. Klatt then threw the heater to retire the games final batter, Tyler Brekke, on strikes.

“To come out with a victory like that in the first round is nice,” Klatt said. “Hopefully we can keep it going.”