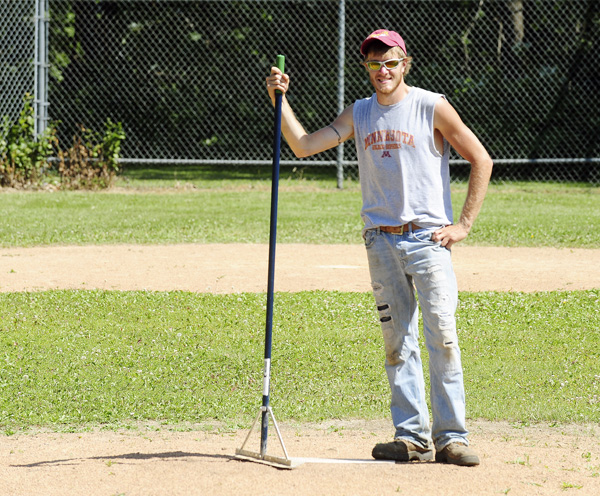 Spencer Dahl stands on the pitching mound of a new baseball field at near Brookside School. Dahl and Bob Hamberg, who work for the Albert Lea School District, built the field from scratch during June. -- Andrew Dyrdal/Albert Lea Tribune

Actually a 1991 baseball card of Puckett, which was slid under home plate by Spencer Dahl, who along with Bob Hamberg, built the field near Brookside Education Center during June.

Dahl said he got the idea after Minnesota Twins grounds crew members laid a photo of Harmon Killebrew under the home plate of Target Field after he died. When the plate was about to be secured at Brookside, Dahl acted fast. 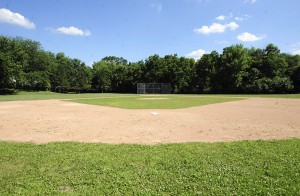 The new field near Brookside Education Center was already in use before the bases were installed. -- Andrew Dyrdal/Albert Lea Tribune

“I thought it would be fun to do my own thing so I ran home and got the card from my house,” he said.

Dahl and Hamberg, the Albert Lea School District’s head groundskeeper, began building the field during the first week of June and finished in three weeks. Unused since 1987, all that was left of the field was the backstop — beyond that, it was all grass.

The two school district employees began working by measuring the infield. From there they built the arc that separates the infield and outfield and measured the base paths.

Dahl brought in eight loads of aggregate — a mixture of dirt and sand — to fill in the infield. After leveling it off, three non-matching bases were installed before the pitching mound was built. A small amount of aggregate was added to the mound to dress it up.

The school district’s Coordinator of Buildings and Grounds, Dennis Hamberg, said the field was built because Albert Lea has a shortage of places kids can play baseball.

“With city league softball and Snyder Fields actually being softball fields, we don’t have enough baseball fields,” Hamberg said. “There are eight Knights teams so we rebuilt the one at Brookside with some man power and very little cost.”

The field is owned by the school district and is near little league dimensions, perfect for Knights baseball teams.

“It was fun having to know exactly what you needed to do and how precise the bases needed to be,” Dahl said. “It’s a lot more work than what you see when you look at a baseball field.”

While the field has no official name, Dahl dubbed the field “Puckett Park” because of the late Twins heroes card under home plate.

“It was just me and Bob working on it every day,” Dahl said. “We take a lot of pride in it.”