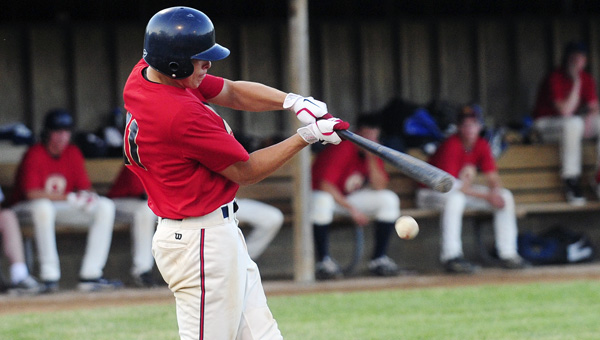 Tri-City center fielder Cole Sorenson makes contact with a pitch Tuesday against the Blue Earth Pirates at Hayek Field. Sorenson, who was the Tribune’s baseball co-Player of the Year, was one of three former Albert Lea Tigers players playing for Tri-City. -- Andrew Dyrdal

Jordan Martini sparked the Tri-City Redlegs’ offense Tuesday with a two-run triple in the sixth inning to pull the home team within three runs of the Blue Earth Pirates.

The Redlegs scored again on its next at-bat but couldn’t muster another run in a 9-8 loss at Hayek Field.

After being stifled by Pirates starting pitcher Bobby Olson through three innings, the Redlegs cut into a 7-1 deficit with a run in the fourth and fifth innings. 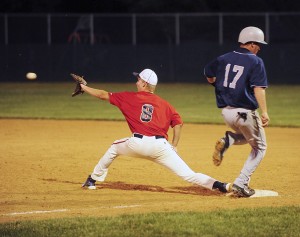 Trailing 9-3, the Redlegs’ Logan Spitzack, of Triton, opened the bottom of the sixth inning with a double off the center field fence. Albert Lea’s Connor Kortan then grounded out before the Redlegs reached base on six of its next seven at-bats.

Josh Shirley and Ben O’Reilly hit back-to-back singles to score Shirley, before Chris May, of Southland, fouled out to third base. Martini, of Rochester Century, then hit a two-run triple and scored on a single by Albert Lea’s Cole Sorenson. Kyle Young then singled to move Sorenson to second, and Aaron Klatt, of Albert Lea, was hit by a pitch to load the bases before Adam Borst struck out on three pitches to end the inning.

The Redlegs all of a sudden had a two-run deficit and all the momentum but both teams were held scoreless through the final three innings.

“I don’t think we were ready to play the first four, five innings,” Redlegs co-head coach Jack Kortan said. “(Blue Earth is one of the better teams we’ve played all year. One through nine they could hit the ball pretty good.” 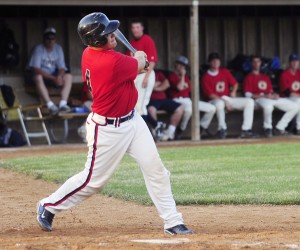 The Pirates hit the ball hard and forced the Redlegs’ defense to make tough plays. The Pirates scored twice in the first inning on two hits and twice in the second on three hits. When they did make outs it was usually productive.

The Redlegs, which is a Class A amateur baseball team made up of players from Albert Lea, Rochester and Mason City, among others, chipped away at a four-run deficit in the second inning when O’Reilly scored Shirley on a single to left field. The Redlegs gave a run back in the third, though, and struck out in order in the bottom of the frame.

The Pirates opened the fourth with consecutive doubles and built a 7-1 lead before the Redlegs score in the bottom of the inning.

The teams exchanged runs in the fifth before the Redlegs exploded for four runs on six hits in the sixth. Neither team would score again.

The Redlegs threatened to tie the game in the bottom of the ninth after opening the inning with three consecutive hits. Borst, of Dover-Eyota, started the inning with an infield single to second base, and Spitzack doubled down the left-field line, moving Borst to third. With no outs, Kortan delivered an RBI single to left field, scoring Borst, but was tagged out after taking a big turn at first base. Spitzack, representing the game-tying run, was held at third base on Kortan’s single and never made it home. Shirley grounded out, and O’Rielly struck out swinging on a high fastball to end the game.

The Redlegs scored most of its runs off pitcher T.J. Schmidtke, who relieved Olson after 3 1/3 innings. Olson allowed one run on three hits and struck out five batters. He was pulled in the fourth, though, after allowing three of the first four batters to reach base on two walks and a double.

Tuesday’s loss was the Redlegs 12th game in its inaugural season. The team is 6-6 and while many of the players aren’t used to playing with each other, Kortan said the players are comfortable because they’ve played against each other.

“Pretty much everybody knows each other,” Kortan said. “We all know each other. The chemistry is good. There’s a lot of joking around in the dugout — it’s pretty loose.”

Two recent Albert Lea Tigers players hit the ball well at their home field. Kortan was 3-for-5 with a double and RBI, and Cole Sorenson was 2-for-3 with an RBI. Sorenson reached base four times in five plate appearances.

The Redlegs play again at 7:30 p.m. tonight against the Mankato Twins at Franklin Rogers Park in Mankato. The team plays at Hayek at 8 p.m. Friday against the Rochester Royals.