My neighbor stops by.

“Everything is nearly copacetic. I try to be cheerful in bad weather — hot or cold. It drives people crazy.”

“I have to ask, why you are wearing a loafer on one foot and a bedroom slipper on the other?” I say.

“My left foot keeps falling asleep. I don’t want to wake it, so I put a slipper on my right foot. That way, when I walk, my right foot won’t make enough noise to wake my left foot. I was so hungry that I could have eaten my shadow. I stopped at the Group Therapy Bar where they ‘pour it and ignore it,’ sat down, and ordered a slice of pizza. As I waited for my pizza, I heard a soothing voice say ‘Nice hat.’ I looked around, but the place was empty except for Bud Weiser, the bartender and me. I did have a nice hat. A few minutes later, the same voice said ‘Beautiful shirt.’ Soon after, the voice without a body said, ‘Lovely bedroom slipper.’ When Bud brought my pizza, I told him that I was hearing voices saying nice things and there wasn’t anybody there. Bud told me that it was the peanuts.”

“The peanuts?” I wonder aloud. 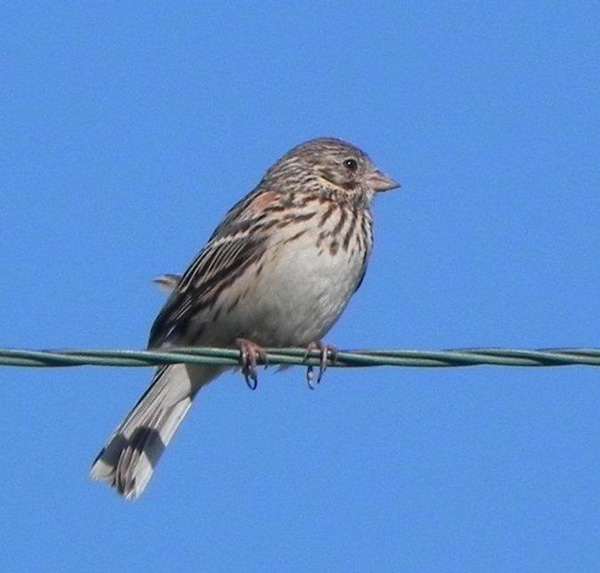 Photo of a vesper sparrow by Al Batt.

There was an excessive heat watch.

I would rather have had a Timex.

A haze filtered through the air as I interacted with mosquitoes and deerflies. Cicadas whined as if they were operating miniature sawmills.

I perspired robustly as I weeded. I considered our agricultural engineers. The weather stressed the farmers more than the plants. Hot weather with farms made into seasonal waterfronts.

I listened to song sparrows, chickadees and indigo buntings sing nearby and a vesper sparrow sing from a distance. A common yellowthroat called, “Follow me, follow me.” Robins fed on mulberries. An unseen catbird meowed from a mulberry tree. I watched a goldfinch eating sunflower seeds. It had the process down to a science. The finch rolled a seed back and forth over the edge of its lower bill. This sideways motion cracked the seed, ejected the hull and left the kernel in the bird’s mouth.

I stared at a mourning dove at a platform feeder. It did a bobblehead impersonation in order to stare back at me.

As I eliminated competition for the hollyhock, phlox, mint and motherwort, young grosbeaks made plaintive calls. I saw a female fly by. The underwings of rose-breasted grosbeaks are beautiful. The female has yellow linings and the male replicates the red of its breast under its wings.

I walked between weeds on a day of toos — too hot, too humid, too buggy, too short. A walk fractures the day. No matter how fast I hike, it forces me to slow down. Unless I am being chased by a bull, that is never a bad thing.

When it comes to summer days, some are good and some are not so good. As the day cooled slightly, I stepped outside into the darkness. I found a perch on the deck of our house and listened to the stars. No, I wasn’t listening to an entertainment broadcast that kept me informed of the bad behavior of celebrities. I watched the stars in the sky. Fireflies danced in lights as katydids sang, “Katy did. Katy didn’t.” It was lovely. Earth at its sweetest. One summer night wasn’t just good. It was perfect.

A snapping turtle bit a friend. She (I’ll bet you were all sure it would have been a man) was taking photos of the turtle and got a little too close. She went to an emergency room and learned that she was the first snapping turtle attack victim they had ever treated. Shortly, posters went up around town with a photo of a snapping turtle along with the words, “Have you seen this turtle?”

“Do birds taste their food?” Birds have taste buds and can taste. In comparison with other animals, birds have few taste buds. Therefore, their sense of taste is probably not as sharp as other animals. A chicken has 24 taste buds, a starling 200, a mallard 375, a human 9,000, and a pig 15,000.

“Does a duck’s quack echo?” It does. Not all ducks make a sound that could be called a quack.

“How old does an oak tree have to be before it produces acorns?” The majority of oaks require at least 20 years before they are capable of producing an acorn. Some may wait until they are 50 years old before producing acorns.

Willow trees have salicin in the bark. It is similar to aspirin, acetylsalicylic acid. Some of those who have gone before us chewed the bark of aspirin to combat toothaches and headaches. How did they know to that? They might have learned from the Native Americans. I think they got onto it because beavers never suffered from headaches or toothaches. In honor of the beaver and its sharing of a headache remedy, I would like to share this bit of poetry, “I had a little beaver that I tied up with a cord. But I had to let him go. Because I hate to see a beaver bored.”

Heat is the most common weather-related cause of death. Some research indicates that an ocean of corn causes a spike in the dew point. I believe the excessive hot weather is due to all the good folks who were wishing for warmer weather last winter. What we call an extended heat wave is called a normal summer by parts of this country. We have no dearth of weather. We can’t put up a barbed wire fence in order to keep the weather out. It will change. Weather is fickle. If the wind quits blowing, the gigantic wind turbines near my home would be disgusted.

“The landscape belongs to the person who looks at it.” — Ralph Waldo Emerson

“The mind, stretched by a new idea, never goes back to its original dimension.” — Oliver Wendell Holmes