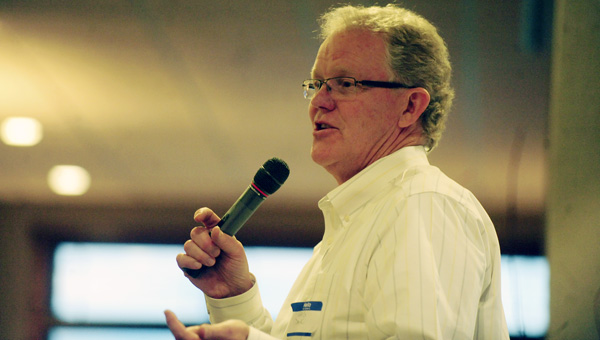 A common thread wound through the clubhouse of Wedgewood Cove Golf Club on Friday during the Albert Lea High School Athletic Hall of Fame banquet: success.

In a room filled with state and conference champions, guest speaker Craig Dahl shared with the audience one of his favorite quotes on success.

“You can have success but it eventually comes to an end,” Dahl said. “But when you are significant it never ends as it continues to contribute to other success long after you’re gone.”

Dahl was no slouch on success. While at ALHS, the 1971 graduate was an All-State quarterback after leading the Big Nine Conference in passing yards his senior season. Dahl was also an All-State Honorable Mention hockey player and district champion hurdler. It was after high school when Dahl experience the most success though.

After graduating from Pacific Lutheran University in Tacoma, Wash., where he was coached in football and mentored by former Lea College coach Frosty Westering, Dahl said he taught for two years in Winona before teaching in Billings, Mont.

While in Billings, Dahl helped coach football at Rocky Mountain College. He said he was fortunate to follow his head coach to Bethel University in St. Paul where he was asked to start a hockey program — from scratch.

“I didn’t know what the heck I was doing,” Dahl said. “It was a wonderful experience and a wonderful opportunity that I had nothing to do with except that I had some hockey background.”

Dahl said the university also wanted someone on staff to help coach football — so he did — and in his final two seasons at Bethel his hockey team finished second to St. Thomas University.

While at Bethel, Dahl received a surprising phone call from arguably the most famous hockey coach in the world at the time — Herb Brooks.

“This was right after the 1980 Olympics and the voice said ‘This is Herb Brooks,’” Dahl said. “I said ‘Yeah right, which one of my friends is playing a joke on me now?’”

Dahl said that phone call began a 22-year relationship with Brooks — who Dahl affectionately refers to as Herby — and he became his mentor.

After the 1984-85 season, Dahl left Bethel for the University of Wisconsin-River Falls. He coached there for one season before receiving another phone call from Brooks, this time with a job offer. Brooks asked Dahl to visit St. Cloud State University with him.

Dahl said Brooks informed him that SCSU was planning on starting a Division I hockey program and that if he took the job as head coach, Brooks wanted Dahl to be his assistant.

“They didn’t understand what it was going to take to start a Division I hockey program,” Dahl said. “Herby walked in and said ‘We’ve decided this isn’t for us.’”

A week later, though, Dahl said Brooks called him again and told him they were going back to St. Cloud to accept the coaching positions. Brooks coached during the 1986-87 before leaving for the Minnesota North Stars. Dahl then became the head coach for the next 17 seasons.

“Thank goodness I had a great mentor in Herby,” Dahl said. “He would encourage me and say ‘Don’t have that, that’s too strong of a rule.’”

While at SCSU, Dahl said he stressed academics and made it a priority to have a team GPA of 3.0 or higher. He also said if his players didn’t attend class they wouldn’t play, and that he learned from his high school football coach, Jim Gustafson, if you take playing time away it’s a “big deal.”

Dahl also said he taught his players that you can’t just play the game but have to compete in the game.

“There’s a difference between going out and playing and competing,” he said.

Dahl, who is now a regional manager for Principle Financial in Pittsford, N.Y., said that coaches, just like parents, leaders and bosses, have a responsibility to get his or her people to be as good as they can be.

“The sign of being a good leader is incorporating a culture of success and expectations that we’re going to be as good as we can be,” Dahl said.

Dahl said he grew up on Hawthorne Street in a house of eight. He called Albert Lea a “wonderful place to grow up in.”

“We reminisce about it,” Dahl said. “Being able to ride your bike around town without a helmet, not having to worry about being abducted, molested and all those things going on we worry about as parents today.”

Dahl encouraged the audience, including the other inductees, to leave a leagacy.

“When you leave people will have looked back on you and learned something from you,” Dahl said. “You don’t have to be special, you just have to be a good person.”

Hockey Day brings out players of all ages