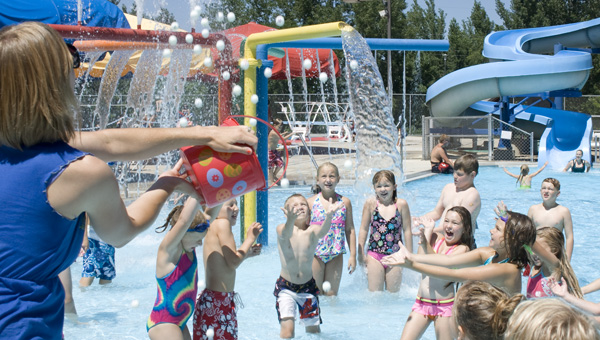 Jenny Davis, recreation program supervisor for the Albert Lea Parks and Recreation Department, dumps a bucket of pingpong balls into the kiddie pool Friday for the younger children. The first person to find the pingpong ball with a red star won. -- Sarah Stultz/Albert Lea Tribune

Children attending the Albert Lea city pool on Friday were in for an extra dose of fun during the second annual play day sponsored by the Parks and Recreation Department and a local radio station.

The pool was open its regular hours, but from 1 to 3 p.m., there were extra water games for the children young and old alike. 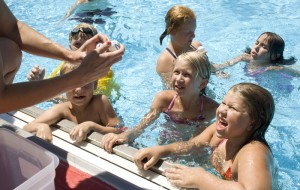 Jenny Davis, recreation program supervisor for Albert Lea Parks and Recreation, said the play day at the pool was actually an idea of one of the pool managers.

So organizers developed the play day, in which the children can compete in various water games for prizes.

The prizes were sponsored by Power 96, which also aired live from the event.

The first game of the day started off with a pingpong ball contest, where the older kids, standing in the 4-foot water, had to pick out pingpong balls with letters on them to spell a certain word.

As a lifeguard dumped out a large bucket of pingpong balls, the children geared up for the task.

Davis announced that each ball had a letter written on it, and the children were to find all the letters to spell out the word “fish.” Whoever could do the task first could win a pass to Adventureland. 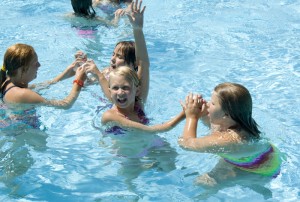 Madeline Shipler, 10, raises her hand Friday after finding out she and Makena Jacobson, 8, had collected all pingpong balls necessary to spell out the word “fin.” The two girl won Adventureland passes.

After a few minutes with no success, Davis announced over the intercom that she was going to make the task easier; now the first person who could spell out the word “fin” would win.

After several minutes again without any success, she announced that if two people could work together to find all three letters, both children would win passes.

Shortly after, Makena Jacobson, 8, and Madeline Shipler, 10, announced they had found the word.

“It was super fun,” Jacobson added.

The games then continued in the kiddie pool, where a similar game was played. This time, the children had to find just one ping pong ball — a ball with a red star drawn on it.

A young girl found this in just a few seconds.

The ping pong games were followed by a speed boat relay — where the older children were divided into teams and had to swim one by one to the opposite side of the pool to dump a cup of water into a bucket. The team with the most water in their bucket by the end would win. 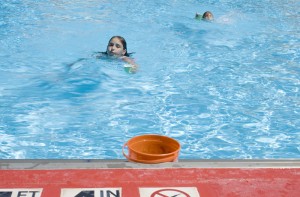 Young swimmers participate in a speedboat water relay Friday at the Albert Lea city pool. All the children were divided up into four groups, and then one by one each swam across the pool to dump a cup of water into a bucket. The group that had the most water in their bucket at the end won.

That game was followed by a hide the balloon contest, squash the shark contest and a scavenger hunt.

At least 30 kids participated in the older kids’ games, and a similar number played the young kids’ games.