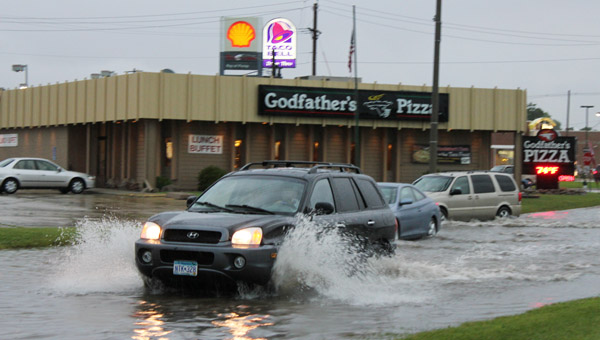 A severe thunderstorm struck Freeborn County and surrounding counties Friday evening, drenching the ground and causing streets in many cities, including Albert Lea, to flood. 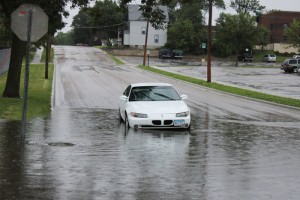 A Pontiac is stranded in the high water near Morin Park at St. Mary's Avenue and West Main Street on Friday night. -- Tim Engstrom/Albert Lea Tribune

Slowly moving black clouds to the west around 3 p.m. delivered rain in Alden by 3:30 p.m. and within a half hour it was raining in Albert Lea, too. The automated weather station at the Albert Lea Municipal Airport says the storm dumped 1.64 inches of rain in the hours from 3:45 to 6 p.m. 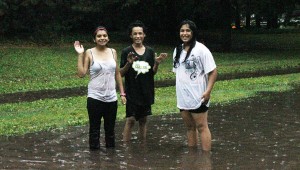 Three girls play in the water on Euclid Avenue in Albert Lea on Friday night during a severe thunderstorm. -- Tim Engstrom

The National Weather Service had issued a flood watch for Freeborn,

Faribault, Waseca, Steele and many other counties in southern Minnesota. The statement said to expect continuing rain Friday across the region. The flood watch was in effect through Saturday morning. People were advised to take caution in low-lying areas and flood-prone streets.

An excessive heat watch took effect Saturday afternoon and will run through Wednesday. People are advised to drink extra water and stay in air-conditioned rooms when possible.