Thanks for helping with the Battle of the bands

We are pleased to announce to the community the first winner of Battle of the Bands: Riptide! You guys did an awesome job! 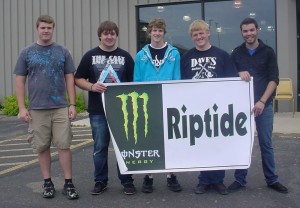 The members of the band Riptide pose for a photo. From left are Alex Nielsen, Mike Dyrdal, Ray Stephenson, Christian Andersen and Tim Stoneking. -- Submitted photo

Ann Austin, of the United Way of Freeborn County and Kristin Mummert, of Bergdale Harley-Davidson

organizers for 2011 Battle of the Bands Block Party