The future of Minnesota is at stake

This state government shutdown is painful for many Minnesotans. I am often asked, “Why? Why are you and Republican legislators putting us through these hardships?”

I believe that the future of Minnesota is at stake. Our way of life, what makes Minnesota special and successful, hangs in the balance. 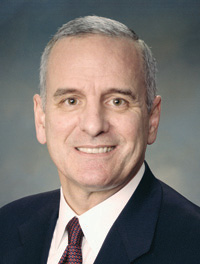 Will we continue to have one of the best higher education systems in the world? Not with the 19 percent funding cut to the University of Minnesota and the 14 percent reduction to Minnesota State Colleges and Universities campuses that the Republicans proposed. A mediocre educational system will lead to a mediocre state economy in the years ahead.

Will we continue services that enable senior citizens to live in their own homes, rather than being forced into more expensive nursing homes? One elderly couple would be forced to place the husband in a nursing home, if their assisted living services were eliminated. The wife would be left without her husband and her home.

Will we continue to provide people with disabilities with the support they need to live independent and productive lives? Not by reducing the amount of time their personal care attendants can spend with them. Not by cutting the funding for special education. And not by denying affordable health care to many of them, as well as senior citizens and families with children.

That is some of what is at stake for the future of Minnesota.

My budget cuts health care costs and reduces the state workforce; but it also invests in public schools, funds all-day kindergarten, and protects college students from huge tuition increases. I continue to fund cities and counties to keep down property taxes. My latest budget plan increases taxes only on people making more than $1 million a year in Minnesota, which affects only 7,700 people. Thus, more than 99 percent of Minnesotans would see no income tax increase and no state-imposed property tax increase from my proposal.

Republicans remain absolutely opposed to asking the very richest Minnesotans to pay more in taxes. Instead, their budget would raise property taxes by $1.4 billion over three years on homeowners, businesses and renters.

Senior citizens, people with disabilities, children born into poverty, college students from middle-income families and their parents would also pay the price for Republican legislators’ refusal to ask the richest Minnesotans to pay even a single dollar more in taxes.

In our democracy, if the voters give their “mandate” entirely to one party in an election, then that party has the right to determine policy until the next election.

However, when the voters deliver a split verdict, as they did in Minnesota last November, then neither side is entitled to have it all their way. For the past two months, I have offered again and again to compromise, and meet the Republicans halfway. They have refused to compromise to reach an agreement.

I have offered more than $2 billion in cuts to existing programs, and proposed to raise income taxes only on taxpayers who earn over $1 million per year.

The Republicans said no.

In the spirit of compromise, I said I would agree to raise taxes on cigarettes, even though I do not personally support such a tax increase.

The Republicans said no.

No compromise. Republican legislators insist on having it all their way, or no way. That is not responsible, or even rational, leadership.

Mark Dayton, DFL-Minneapolis, is the governor of Minnesota and a former U.S. senator.