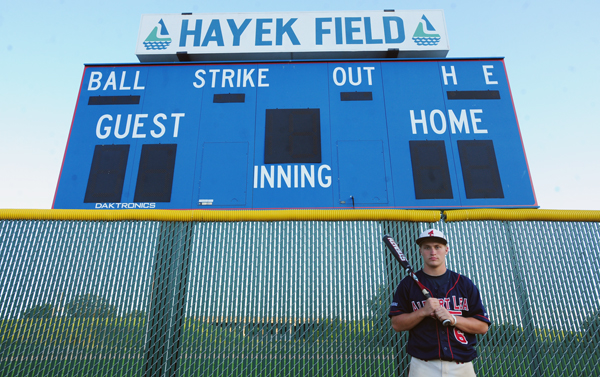 Albert Lea baseball player Ethan Abben, above, has settled nicely into his role as the team’s shortstop even though he believes he’s a better catcher. The sophomore was key last week in the Tigers’ District 1 championship run at Hayek Field. -- Andrew Dyrdal/Albert Lea Tribune

Prior to this spring, Ethan Abben hadn’t played shortstop since he was 12 years old. He’s reacclimated quickly.

The Albert Lea Post 56 baseball team’s shortstop strung together the best five-game stretch of his career Tuesday through Sunday in the District 1 Tournament and helped the Tigers reach the American Legion state tournament for the first time in over three decades.

Abben, who turns 17 Wednesday, spent the past five years behind the plate. This year, during his first season on the varsity team, there was no room for him at catcher. The position was filled by Big Nine All-Conference performer Connor Kortan so Abben was moved to the position he had the second-most experience at — shortstop.

“I had a little infielding experience,” Abben said. 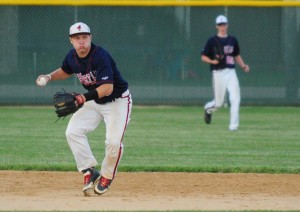 Albert Lea Post 56 shortstop Ethan Abben sets to throw the ball toward first base Tuesday in the first round of the District 1 Tournament at Hayek Field. -- Andrew Dyrdal/Albert Lea Tribune

If you call it experience. The sophomore only played shortstop during his first two seasons in Albert Lea’s youth baseball program. Those years, Abben admits, baseball wasn’t nearly his favorite sport.

“At the beginning of the year I was a little skeptical,” he said. “I didn’t know how I was going to do technically. But I needed to do it, and the more plays you make the more comfortable you get and the more confidence you have.”

And Abben made a lot of plays. During last week’s district tournament held at Hayek Field, almost every infield grounder seemed to be hit at Abben. He responded by playing the position flawlessly.

“I’m as comfortable as I can be,” Abben said. “During every play I think the ball is coming to me so I can make the play and get them out at first.”

Post 56 coach Jack Kortan said he considered moving Abben out of shortstop during the regular season because he didn’t think he was covering as much ground as he could of. Then, Kortan said, this weekend a “light switch went off.”

“He grew up a lot,” Kortan said. “Trust me I’ve had my doubts and thought of moving him around, but during this tournament he played awesome.”

Abben, who also grew up playing football, basketball and wrestling, started playing baseball at 11 years old. He said he loved playing it and watching the Twins but, for whatever reason, didn’t join organized ball until later. The sport didn’t win his heart over until three years ago at 14 when his team began to win a lot.

“That’s when I got big into it,” Abben said. “I started focusing on it more during the offseason.”

This season, Abben played primarily at shortstop but also played second base and pitched when needed to. He said playing second base was easier but he was more comfortable at shortstop because he knew the situations better.

But what position does Abben think he’s best at?

Abben said he’ll play wherever is best for the team, though, and that to improve at shortstop he needs to work on throwing at different angles, especially side-armed.

Abben said the Tigers, who only committed four errors through five tournament games, pride themselves on defense. He said each player is confident in the field, especially when the team’s top two pitchers – seniors Aaron Klatt or Cole Sorenson – are throwing.

“It’s so sweet because you know Klatt and Sorenson are both dominating pitchers,” Abben said. “They’re going to get their strikeouts and the less chances for you in the field is better.”

Abben’s glove wasn’t the only thing setting him apart during the district tournament. The Tigers’ leadoff batter had a .370 batting average with five doubles and eight RBIs during the team’s district-championship run. He was also 4-for-5 with three doubles and six RBIs in the title game.

“I was having an average year,” he said. “Sometimes I was doing better than others. But everybody hits (their peak), and I just got lucky when the time came.”

The Tigers begin the four-day Division I Minnesota State American Legion Tournament on Friday at Eden Prairie High School. Despite the outcome, it will be the final time the entire experienced Tigers team plays together. After the tournament, the team will lose up to five senior starters and Abben, among others, will need to step into leadership roles.

Abben specifically called out fellow sophomore and friend, Makael Lunning, to improve this offseason and become a leader next year. Other returning starters will be Cody Haaland and Dylan See-Rockers.

Abben, who will likely be the football team’s starting quarterback this season, said he plans on training for baseball this winter at the Sports Institute in Mankato. Until then, he’s focused on the task at hand — the state tournament.

“There’s going to be a lot of good teams up there,” Abben said. “I think if we just play our best we’ll be fine.”