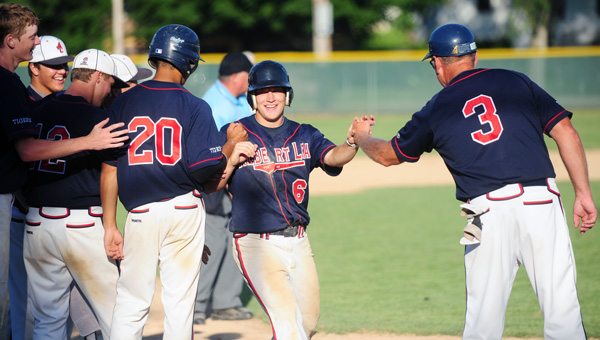 Albert Lea's Ethan Abben (6) is greeted by teammates Sunday after hitting a two-run home run in the eighth inning against the Rochester Red Hawks at Hayek Field. Abben went had four hits, including three doubles, in the District 1 championship win. -- Andrew Dyrdal

Baseball players can have the greatest performance of their careers during any given game. Ethan Abben picked a good one.

Albert Lea’s sophomore shortstop went 4-for-5 with three doubles, a home run and six RBIs in a 16-5 rout of the Rochester Red Hawks Sunday at Hayek Field. The decisive victory propelled the Post 56 baseball team into its first American Legion state tournament berth in over 28 years. 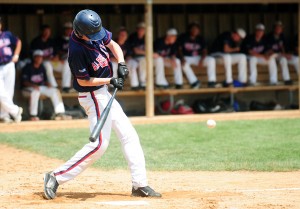 “I was just playing baseball,” Abben said. “This game was no different than the first game of the season. I was just seeing the ball and making the plays.”

Abben made plays in the field, too. The shortstop was the Tigers’ most reliable defender through five tournament games and committed no errors, while making a number of spectacular putouts. And when the Tigers fell into an offensive lull during the District 1 championship game, Abben provided the spark.

Trailing 3-2 in the top of the seventh inning, and hitless in its last 11 at bats, the Tigers finally got to Red Hawks starter Steve Serratore and began to put a threat together. Tyler Woodside led off the inning with an infield single, Makael Lunning walked and Dylan See-Rockers hit a bunt single to the pitcher to load the bases with no outs.

Abben stepped to the plate and ran the count full, while fouling off two balls to keep the at bat alive. On the third pitch of a 3-2 count, Abben hit a line-drive double to the left-center gap which rolled all the way to the fence. All three baserunners scored, and Abben’s bases-clearing double gave the Tigers some much needed momentum and a 5-3 lead.

That hitting was contagious. 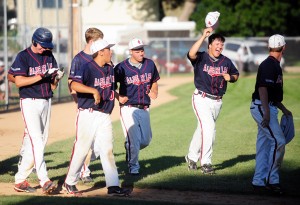 Albert Lea players run out to home plate Sunday to congratulate Ethan Abben after his two-run home run in the eighth inning against the Rochester Red Hawks at Hayek Field. -- Andrew Dyrdal

Connor Kortan and Aaron Klatt hit back-to-back doubles — also to the left-center gap — and extended the Tigers’ lead to 7-3. Cole Sorenson flew out for the first out, and Klatt scored during the next at bat on a wild pitch. When the smoke cleared, the Tigers were suddenly on top of the reeling Red Hawks 8-3.

Woodside, who had been pitching without the lead for five innings looked more relaxed in the seventh and struck out two of the three batters to preserve the Tigers’ five-run lead.

After blowing a four-run lead against the Red Hawks earlier in the day, the Tigers wanted to leave nothing to chance and scored five more runs in the eighth to build a 10-run lead.

Lunning led off the eighth with an infield single to shortstop, and See-Rockers bunted him over to second base. Serratore was pulled for reliever Sam Hinsch, who was no match for the top of the Tigers’ batting order.

Abben notched his fifth and sixth RBIs of the game with a two-run home run to left field, his second of the season, before the Tigers unleashed a flurry of singles. Kortan, Klatt, Sorenson and Haaland each singled, and J.T. Bellrichard hit an RBI sacrafice fly to center field as the Tigers built a 13-3 lead, and amazingly, just five outs after trailing by a run, put themselves in a position to win by the 10-run rule.

The Red Hawks kept the game alive with two runs in the eighth, but the Tigers tacked on three more runs in the ninth. Abben and Klatt each hit their third doubles of the game, and Sorenson singled to make it a 16-5 final.

It was the third game in two days between the Tigers and Red Hawks. The Tigers beat the Red Hawks 12-2 on Saturday in the semifinals of the double-elimination tournament. The Red Hawks then beat the Rochester Patriots en route to another matchup with Albert Lea in the championship game. Because the Tigers hadn’t lost in the tournament, the Red Hawks needed two wins to advance to state — they beat the Tigers 8-7 in Game 1, which began at 1 p.m. Sunday and set up the decisive Game 2.

While it’s unknown when the Tigers Post 56 baseball team last went to the state tournament, Albert Lea coach Jack Kortan said they haven’t gone since he moved to town 28 years ago.

“I couldn’t be prouder,” Kortan said. “I’ve coached these kids since they were eight years old and they’re dang near like sons to me. It’s very special.”

The Tigers had a chance earlier to clinch the District 1 title but faltered in the late innings.

The Tigers led 6-2 going into the bottom of the sixth inning but gave up three runs in the sixth and seventh innings to fall behind 8-6. The Tigers pulled within a run in the eighth and threatened to tie the game in the ninth, but with runners on first and second and one out, Abben hit a line drive to Red Hawks shortstop Kyle VanWettering, who leaped in the air, caught the ball and doubled up Makael Lunning at second base.

The Red Hawks had all the momentum going into the second game, which began shortly after the first ended.

“You can act like you’re not disappointed but if anyone wasn’t disappointed they were putting on a front,” Kortan said. “But if you told me at the beginning of the year we had one game against (the Red Hawks) to go to the state tournament I would have taken it.”

Woodside, a 2011 graduate of Glenville-Emmons high school, earned the win for the Tigers. He allowed seven hits over seven innings and allowed three runs — one earned — while striking out five.

“It feels awesome,” Woodside said. “It was a great experience, and I’ve never experienced (a state tournament) before.”

Kortan said Woodside wanted to keep pitching late in the ballgame even with the win all but in the books.

“For him to come out and give us seven strong innings was awesome,” Kortan said.

The top four batters of the Tigers’ order in Game 2, including lead-off hitter Abben, went a combined 14-for-22 with eight doubles and 14 RBIs. Kortan was 3-for-6, Klatt was 4-for-6 and Sorenson was 3-for-5.

“This will be the last time we play together and it’s sad,” Kortan said. “But we need to keep moving forward. I couldn’t be prouder of our team. They battled.”