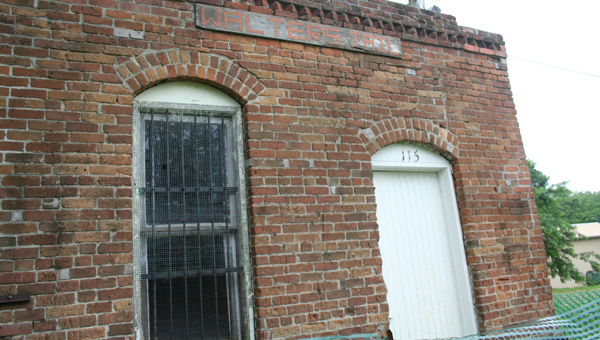 The historical Walters jail sits empty and boarded up in the city’s park. The jail was first built around 1906. -- Kelli Lageson/Albert Lea Tribune

WALTERS — The historic jail in this community has been in need of repair for some time, and locals are planning to do something about it.

The unused jail is in the city’s park and has been listed on the National Register of Historical Places since 1980. City leaders will hold a public meeting at 10 a.m. on Aug. 6 in the community center to discuss what to do with the jail.

“We’re just starting to move on this,” Kathy Meyer said.

Meyer is a clerk with the city and is working with city treasurer Becky Krohnberg and other interested people about what options are available for the jail. While they don’t want to see it gone, tearing it down is one of the options because of the state of disrepair the jail is in. Making repairs would also cost money, which the small city doesn’t have.

“We can’t generate money in a town of this size,” Krohnberg said.

Both estimated the jail needs about $25,000, which would be the minimum amount needed to repair the structure. They also said they don’t want to apply for grants, because after renovations the jail would have be open to the public as a museum and then they’d have to worry about staffing.

The jail was built around 1906 as a wooden building, then later renovated with a brick exterior. It has one cell and two rooms. In a town of Walters’ size, of less than 40 households, Meyer and Krohnberg worry if the jail went away that the town would lose even more of its identity.