Wilson wasn’t the only biz at Blazing Star

There’s one major asset for the former Wilson & Co. meatpacking plant that could get overlooked. What’s now the Blazing Star Landing actually has access to two railroads.

For several decades this factor gave the city’s major industry an obvious way to ship its meat products to customers in other parts of the nation. Those two railroads, the Milwaukee Road on the south side, and the Rock Island Line on the north side, could be used to bring livestock to the Albert Lea plant for processing. Both railroads could also be used to bring in processing supplies and coal for the power plant. 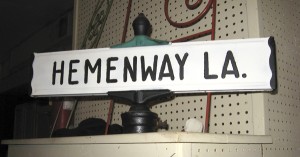 This is the street sign for an alley near the Wilson & Co. plant that used to be called Hemenway Lane. -- Ed Shannon/Albert Lea Tribune

In later years, except for the coal cars, the use of the railroad side tracks gradually declined with the advent of cattle trucks and refrigerated trailers. Yet, the railroad tracks are still there and trains on both lines go past every day.

There may be a misconception that the entire area of the present Blazing Star Landing was once part of the Wilson-Farmland plant property. This isn’t quite correct.

The portion of the land facing East Main Street and South Garfield Avenue was used for several businesses and private residences.

Right at this point I have no intention to even try to list all the business ventures that were on those two streets near the packing house through the years. Instead, here’s an indication as to what was on this part of what’s now the Blazing Star Landing in 1970, according to the city directory.

It’s somewhat hard to comprehend today, but going east on Main Street just after going over the bridge above the railroad tracks there was a roadway to the right. This roadway went down a slope on what was then called a hill to the plant’s parking lot and main gate.

Just off this roadway, to the left, was a frontage road paralleling Main Street to Garfield Avenue. Four decades ago there were several businesses along this frontage road. They were the Hydro-Mist 5 Minute Car Wash, Guy Nelson’s fruit market and dairy store, E & H Rental, Clemens Barber Shop and the Norge Village (a coin-operated laundry).

Today the south end of Garfield Avenue joins the west end of Front Street to create the present route along the north shore of Albert Lea Lake. However, in 1970, Garfield Avenue ended just south of the railroad tracks and the roadway to the right, mentioned in the last column, went to the livestock gate (Gate 3) and the sewage plant.

What’s now the Blazing Star Landing side of Garfield Avenue had in 1970 Floyd & Jake’s Body Shop & Towing Service near the railroad crossing. In fact, the curb cut for this firm is still there. To the north were six residential units, according to the city directory. Near the East Main Street corner was Patton Concrete Products.

Back in 1970 the street used for the east side entry to the packing house parking lots and loading docks had the name of Eberhardt. Now the signs for this street are designated as Eberhart (perhaps correcting the name to be for A.O. Eberhart, who was governor 1909 to 1915). Anyway, between this street and the East Main Street frontage road was an alleyway with the name of Hemenway Lane. The city directory listed three homes using this name for their addresses.

Just to prove there was a former city street with this name inside the present Blazing Star Landing site, I took a photo of the former sign, which is now at Hemenway Iron Works in Hayward.

Several weeks ago I asked if anyone had more information about the group of Bohemians (Czechs) from the Myrtle area who went to Montana to become homesteaders in the 1920s. Now I’ve had a reply and the result will be either a future column or an article.

With just three exceptions, Ed Shannon’s column has been appearing in the Tribune every Friday since December 1984.