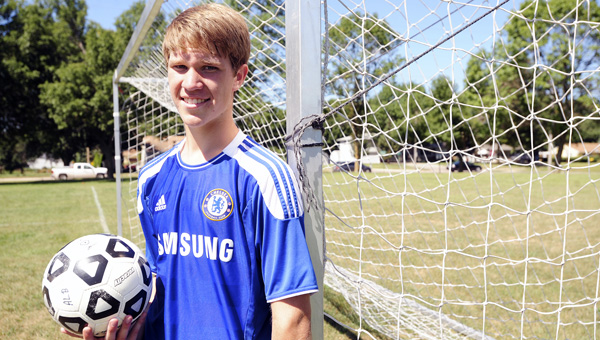 Albert Lea boys’ soccer player, Timothy Furland, above, fractured his knee two years ago after making the top 30 for the state’s Olympic Development Program. This spring he received a second chance and made the most of it. -- Andrew Dyrdal

Two years ago, a fractured knee kept Timothy Furland from representing the state in the Olympic Development Program.

Then he received a second chance.

Furland, 15, a sophomore on the Albert Lea boys’ soccer team, was invited to tryout for the soccer Olympic Development Program when he was 13 years old. According to the Minnesota Youth Soccer website, the program was created to help identify potential national team youth players. These players participate in trials at the district, state, region and finally national level.

Furland advanced past the first cut in state level before the injury broke his chance.

This spring, Furland asked if he could give it another shot. He could, and in April he was one of 150 teenagers to tryout for the 15-year-old team in Woodbury.

After a few days of practice, the field was cut to 30 players and posted on the Internet. No names were listed online, but players’ just numbers. When Furland saw his he was shocked.

“I thought everybody was super good and didn’t think I had a chane at all,” Furland said. “I was so excited for the opportunity.

After making the first cut for the second time in three years, Furland practiced once a week for five weeks before the final 18 players were selected. This time, names, not numbers, appeared on the team’s website. Furland made the team.

“I was amazed,” he said. “I was so much more excited the second time than the first time. I was freaking out.”

The top 18 players received their Minnesota Olympic Development uniforms and practice together three times before heading to Kansas to play in a regional tournament. Furland played forward as the team beat Illinois and played Wisconsin, Illinois and Kansas. Minnesota finished 1-2-1 and Furland was introduced to some of the nation’s top 15-year-old soccer players.

“It’s the highest level of soccer you’ll see,” Furland said. “It was crazy seeing what other players were doing. Our team was crazy good, and I thought ‘How can we not win this tournament?’ It was insane.”

Furland said with the Olympic Development Program, he trained with some of the top college and professoinal coaches.

“I gained a ton of confidence knowing I could play at that level,” Furland said. “My want to go out and play soccer more has improved.”

As one of the youngest starting forward in the Big Nine Conference, Furland said he’s now more confident playing against upperclassman.

“I don’t need to be big or fast as them,” Furland said. “I can play with skill and play around them and still do damage.”

Next summer as a 16-year-old will be Furland’s last chance to tryout for the state’s Olympic Development Program. He said the opportunity gives him a chance to meet college coaches and increase his chance at receiving a soccer scholarship.

“I’ll play anywhere after high school,” Furland said. “I don’t care as long as I play soccer at the highest level possible that I can.”

Furland and the Tigers open the regular season at 7 p.m. Tuesday at Austin. The team’s home opener is at 7 p.m. Friday against Waseca at Hammer Field.