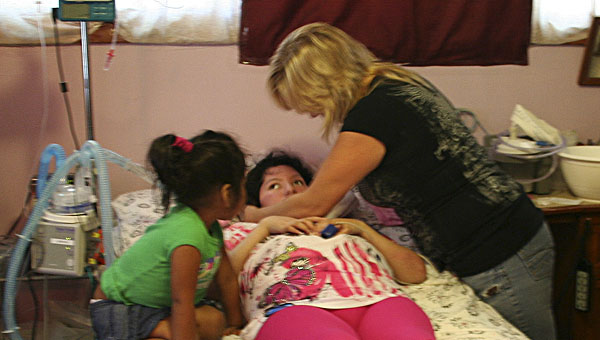 A special 15-year-old girl will celebrate her quinceañera, a Latin American custom that signifies a girl becoming a woman, in a special way on Saturday.

Selena Zuniga’s quinceañera will be special because instead of celebrating it traditionally on her 15th birthday the celebration will fall on her 16th birthday. Selena is special in other ways, which has made the celebration a mix of emotions for her mother, Letty.

Selena was a happy, smiling child before a day in October of 2005, when she was 10 and her life changed.

Selena had been diagnosed with epilepsy when she was young, and took medication for the condition. That October day, she complained of not feeling well, so Letty arranged to have her sister stay with Selena while she went to work. The day went well; Letty was driving back to Albert Lea when Selena started to have a seizure.

Selena can’t sit on her own and has no muscle tone. She is wheelchair bound and fed through a tube. Selena receives physical and occupational therapy in her home to keep her flexible, and she communicates by blinking her eyes.

Though she needs around-the-clock care, Letty and Diane Groth, Selena’s primary care nurse, say they want her to have a quinceañera. Letty said they would have liked to hold it closer to her 15th birthday but with her grandfather’s passing and her aunt’s cancer diagnosis it was decided it wasn’t the right time. Selena herself wasn’t as healthy last year as she is now.

Letty said they’ll do many traditions including having Selena wear a dress, jewelry and have her hair and nails done. She’ll also receive a doll that signifies the last doll she’ll receive as a girl.

Selena’s theme color is lime green, and Letty has been busy working on finding centerpieces and putting together a photo album. Though Selena won’t be able to dance, the traditional song “La Ultima Muñeca” will be played. Letty and her family have also been busy planning and making traditional foods like tamales, beans, rice, salsas and more. Letty found Selena’s dress at New to You, and it perfectly matches the doll she’ll receive.

“It all kind of fell into place,” Groth said.

Girls traditionally have sponsors for supplies and other various things needed at the celebration. Selena had her hair cut Thursday by Mary Samudio with Mary L’s salon, and Samudio plans to do her hair before the celebration Saturday. The celebration open house for family and friends is from 1 to 4 p.m. Saturday at the Knights of Columbus.