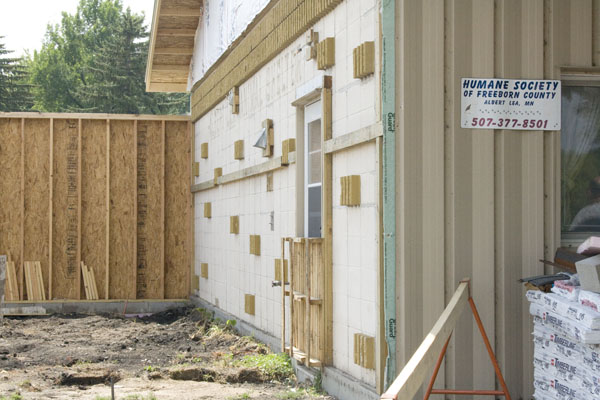 The old door to the animal shelter has been blocked off during the construction of the building’s addition. A new door has been added in the back for volunteers and other people coming to the shelter. -- Sarah Stultz/Albert Lea Tribune

Construction is moving slowly forward on the new addition to the Albert Lea animal shelter, operated by the Freeborn County Humane Society. 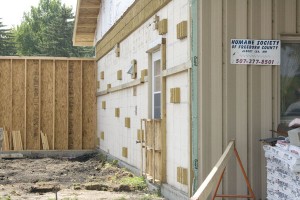 The old door to the animal shelter has been blocked off during the construction of the building’s addition. A new door has been added in the back for volunteers and other people coming to the shelter. -- Sarah Stultz/Albert Lea Tribune

Humane Society Director Christa Stieler said the building, a 40-by-40-foot addition, is slated to be completed by Nov. 15.

As of Tuesday, contractors through Welker Custom Homes Inc. of Owatonna had put in the addition’s foundation, begun to erect one wall on the west end of the building and re-roofed the existing shelter building. They have also blocked off the old entrance on the south side of the building and put in a new door on the north side, which will temporarily be the main door to the shelter.

Stieler estimated crews had been working at the site for at least five weeks.

Still to be put in are the addition’s floors, a majority of the walls and the roof, along with some electrical and plumbing work. 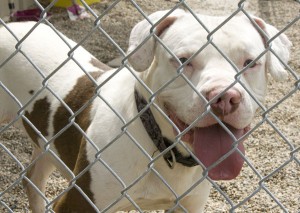 Steve, one of the dogs at the Freeborn County Humane Society, stands outside the animal shelter Tuesday afternoon. -- Sarah Stultz/Albert Lea Tribune

During nice weather, the contractors have been at the site for as many as five days a week, she said.

The project, which will double the size of the current building and provide much-needed space for the animals there, is being completed for $216,000.

When it is finished, the old part of the building will remain the housing area for dogs, while cats will go in the new space. A new main entrance will also be erected on the east side of the new portion with a separate entrance for quarantine and impound dropoffs.

Though there’s still a way to go until the project is completed, Stieler said she is pleased to see the project moving forward.

Plans for the building had been in limbo for at least a year after former Freeborn County Commissioner Linda Tuttle was found to have taken money from her company’s escrow accounts — including a $150,000 anonymous donation given to the Humane Society for the addition — and ultimately gambled it away. 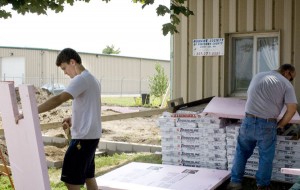 The organization, with the help of the community, has worked diligently during the last year to recoup that money through donations.

Stieler said while the Humane Society did find foster homes for some of the kittens during the construction, there are still some of the cats remaining, along with some dogs, who have had a difficult time with the noise.

“The animals are trying to adjust,” she said.

Stieler noted if people would like to continue to support the Humane Society, there are numerous opportunities to get involved, including donating, volunteering and participating in charitable gambling for the organization at The Nasty Habit.

The shelter is at Frank Hall Park. 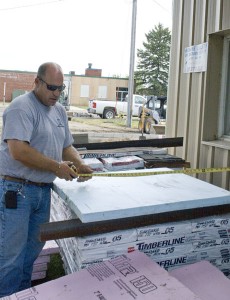