She was born July 8, 1917, in Pepin County, Wis., to James and Helen (Marcks) Barnes. She moved to Olmsted County, where the family farmed. Before her marriage she worked as a housekeeper. On June 25, 1942, she married Albert Staege in Plainview. They moved to Quincy Township, Olmsted County, in 1943 where they farmed until 1969. They then moved to Plainview. Beulah continued to work at the Plainview school as a custodian. She enjoyed gardening, canning, baking and reading. 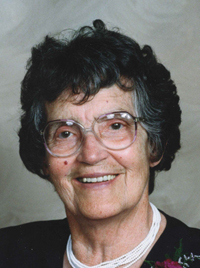 She was preceded in death by her husband; parents; one son, Donald; one step-daughter, Elaine Watson; one sister, Norma Walker; and one brother, Keith Barnes.

The funeral service is at 11 a.m. Friday at Immanuel Lutheran church in Plainview with the Rev. David Frederickson officiating. Burial is at the Little Valley Cemetery. Visitation is Friday, one hour prior to the service at the church.

Schad & Zabel Funeral Home in Plainview is in charge of the arrangements.