Funeral services for Dorothy May Blanchard, 96, of Albert Lea, will be held at 10:30 a.m. Saturday at Hayward Lutheran Church. The Rev. Katie Fick will officiate. Interment will be at the Hillcrest Cemetery. Visitation will be from 4 to 6 p.m. Friday at Bayview/Freeborn Funeral Home and one hour prior to the service at the church. To sign the guest book, go to www.bayviewfuneral.com. 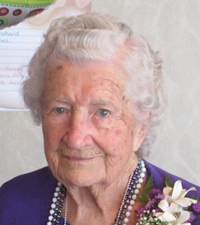 Dorothy May Blanchard was born on Aug. 28, 1914, to John and Josephine (Carson) Leach in Delavan. She attended school in Amboy, Delavan, Winnebago and Fairmont graduating in 1933. During summers Dorothy worked at the canning factory. On Aug. 3, 1940, she was united in marriage to Arnold Blanchard in East Chain. The couple lived in Owatonna and while there, Dorothy worked at a bakery. The couple moved to Albert Lea and together they owned Blanchard Truck Lines where Dorothy worked as the secretary. She was a member of the Wesleyan Methodist Church. Arnold and Dorothy enjoyed spending summers at Lake of the Woods and winters in Florida and Texas. For 17 years they spent one month every year in Alaska also. After Arnold’s death Dorothy continued to go to Florida and Texas staying with family and friends. She enjoyed crocheting dish cloths, pot holders and afghans for family and friends. She will be deeply missed.

In lieu of flowers, memorials are preferred to the Alzheimer’s association or church of the donor’s choice.