A former Freeborn County Sheriff’s Office secretary charged with stealing money from the department pleaded guilty on Tuesday in Freeborn County District Court to theft of more than $1,800.

Kelley Ann Davenport, 37, who worked in the civil processing department of the Sheriff’s Office, pleaded guilty to one count of felony theft as part of a plea agreement with her lawyer, Peggy Rockow, and the Freeborn County Attorney’s Office. 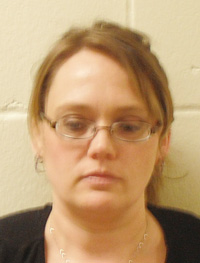 Under the agreement, Davenport pleaded guilty to the count in exchange for having three other felony counts of theft dismissed. This count involved actions between November of 2009 and February of 2010.

The plea was classified as an Alford plea, in which a defendant maintains innocence but admits the prosecution has enough evidence to convict, usually of stiffer penalties.

Davenport, however, agreed to pay restitution on all four of the original charges, totaling about $3,700.

She started with the Sheriff’s Office in 2007, but resigned in February 2010 amid the allegations of misconduct.

According to court documents, Davenport took a series of checks made payable to the Sheriff’s Office and cashed them for her own use.

When she was employed with the Sheriff’s Office, she managed the accounting books of the department’s deposit funds and checks, along with drafting checks as payment for funds collected for the benefit of third parties by the sheriff’s civil process office, court records state.

She also was involved with making periodic deposits of accumulated cash with the Freeborn County Treasurer’s Office or of checks received for copies of records or services at US Bank of Albert Lea.

The allegations were brought to the attention of the former chief deputy of the department by the record’s department staff who noted that the cash register in the department had not been balanced. There had also been people calling the Sheriff’s Office asking why their checks, issued several months prior, had not been cashed.

Freeborn County Sheriff Bob Kindler was not the sheriff at the time.

During the hearing Tuesday, retired Judge James Broberg, who is filling in for a judicial vacancy, said he accepted the plea and ordered Davenport to comply with the probation department for a pre-sentence investigation.