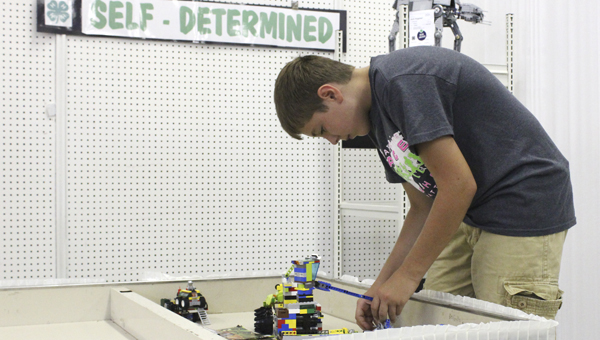 Brent Hanson, 12, works on his Lego project that he submitted for the self-determined category for 4-H. -- Kelli Lageson/Albert Lea Tribune

The day before the Six Best Days of Summer was full of people setting up displays, food stands and much more at the Freeborn County Fairgrounds.

Merriam’s Midway workers were setting up rides, 4-H’ers were submitting projects and vendors were busy setting up food stands on Monday. The Freeborn County Fair officially opens at noon today. 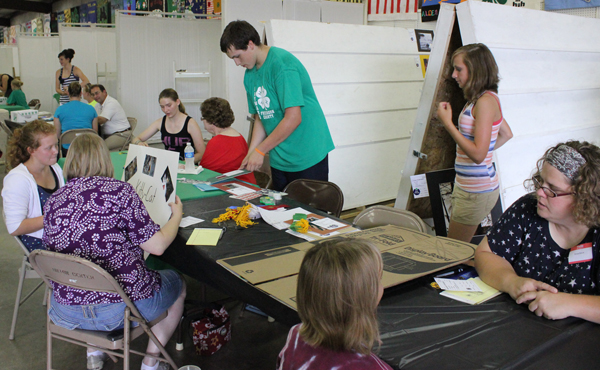 The 4-H Building at the Freeborn County Fairground was bustling with activity Monday as people brought in projects to set up for the fair. -- Kelli Lageson/Albert Lea Tribune

“We’ve got lots of good entertainment this year,” said Mike Woitas, a member of the fair board.

Shows include swine racing, a tiger show and a variety of music scheduled at Entertainment Square. There is also five nights of entertainment at the grandstand, including Jerrod Neimann on Tuesday, The Beach Boys on Wednesday, Larry Gatlin & the Gatlin Brothers on Thursday, Joe Nichols on Friday and Finger Eleven on Saturday. Woitas said he expects Wednesday to have a big turnout.

There’s a free shuttle from the field available for fair-goers. Woitas said he was expecting the humidity to break and have nice weather during the week.

Food vendors could be seen setting up their stands and some were already selling on Monday. Robin Biktora and Kemma Bergland were helping get the FFA food stand ready. 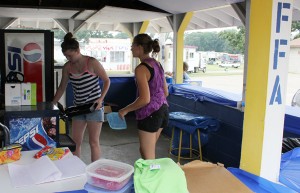 Kemma Bergland, left, and Robin Biktora, right, prepare the FFA food stand Monday. Both said they were excited to spend the week at the fair. -- Kelli Lageson/Albert Lea Tribune

“We’ve made posters and picked up a lot of the food,” Biktora said.

Merle Krause was helping set up the dance floor and seating at Entertainment Square on Monday afternoon and said he’s excited about all the local entertainment that will be available.

“All the acts are good,” Krause said.

Many people were also setting up projects and submissions on Monday afternoon. Adren Magnuson was bringing in flowers for the open class competition. She had a variety of flowers including gladiolas and lilies. She said she enjoys bringing flowers to the fair so they can be seen, because she lives in the country where there’s not a lot of traffic to see her flowers.

“Winning doesn’t hurt either,” Magnuson said with a laugh.

The 4-H Exhibit Building was bustling with activity as 4-H’ers dropped off projects and set up displays. One boy, Brent Hanson, 12, was setting up his project made of Legos for the self-determined category.

“I like building stuff out of Legos,” Hanson said.

To view more projects, stop by the 4-H Building.

To view the complete guide to the fair, contact the fair office at 373-6965 or stop by.

General admission is $9 for children 10 and older and adults. Children age 9 or younger get in free.

Events were listed in the Tribune on Thursday in a special publication. The fair’s website is www.freeborncountyfair.com.

• Touch of Broadway shows: These shows presenting musical highlights from “Annie” and “The Music Man” will be in the Fairlane Building with shows at 6:30 and 8 p.m. Wednesday, Thursday and Friday and shows at 6, 7 and 8 p.m. Saturday.