Gerhart hoping to be more of a factor 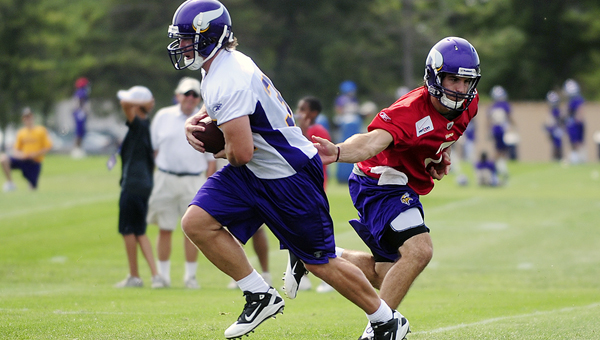 EDEN PRAIRIE — Every time Toby Gerhart touched the ball in his first preseason with the Minnesota Vikings last year, he was hit and hit hard.

And that was just in practice against his teammates.

The golden boy from Stanford was given a rude welcome to the NFL in his first training camp, getting slammed to the turf by the likes of Pat Williams and Ray Edwards any chance they got.

“At the time, I was like God, everybody’s out for my number,” Gerhart recalled with a chuckle. “No matter what I did, I was getting hit. But it was all good, you get hit as a running back, and it was expected as a rookie. Can’t complain, I guess.”

Vikings defenders always seemed to put a little more mustard on their hits when No. 32 had the ball, and the message was clear — Gerhart wasn’t in Palo Alto anymore.

After leading the nation in rushing and touchdowns for the Cardinal, the Vikings traded up in the second round to grab him as a complement to Adrian Peterson. But Gerhart had a quiet rookie season, rushing just 81 times for 322 yards and a touchdown in 15 games.

It wasn’t the kind of impact he expected to have after such a decorated college career.

“I was a little hesitant, a step slow, kind of thinking too much,” Gerhart said. “This year I’m just relaxing, playing, doing what I always did. I feel much more confident and relaxed, and I think this year I can contribute in a lot of different ways.”

It’s no secret who runs the show in the Vikings backfield. Peterson is the first, second and third option on offense, one of the most dynamic players in the NFL and a guy who wants the ball in his hands as much as possible.

The offense new coordinator Bill Musgrave is installing will revolve around Peterson, so there is still some question about how much opportunity there will be for Gerhart to get in a rhythm and get rolling like he was used to doing in college.

Even with Peterson only playing just a few plays in the preseason opener in Tennessee last weekend, Gerhart had just three carries for 8 yards. The sparse workload has taken some getting used to for a workhorse who carried the ball 553 times in his final two years at Stanford.

Only three times last year did he get more than five carries in a game, including 22 touches for 76 yards and a score against Washington.

“It’s a bit different,” he said. “As a running back, it’s hard to get that rhythm when you carry one carry and a quarter goes by and you get another carry, but you’ve got to make the most of it when you get it. For me last year it was pass protection, running routes like that, fine tuning those and contributing in any way possible.”

With the lockout wiping out the summer, Musgrave is getting his first up-close look at Gerhart this preseason. He said Gerhart was “very sharp” and is picking up the intricacies of pass protection quickly.

“We know that Adrian and Toby will both complement each other was we go through the season,” Musgrave said. “Two different running styles. We want to keep both of them healthy. It’s a tough, tough way to make a living for those guys.”

Also in the mix is Lorenzo Booker, an accomplished return man who has shown a little more wiggle and juice than Gerhart early this season.

“He’s got skills that neither one of those two have in terms of catching the ball, splitting out of the backfield and having some receiver skills in his hopper,” Musgrave said.

Left guard Steve Hutchinson said he already has noticed a change in Gerhart.

“Anytime you get a year under your belt and get through your rookie year, you’re going to have a little more confidence in everything you do,” Hutchinson said. “I think that’s a big key to our offense is having a complement back there with Adrian.”

So far in this camp, Gerhart hasn’t taken near the amount of abuse he did as a rookie. Edwards and Williams are both gone, but the way Gerhart handled the treatment — keeping his mouth shut and standing up for himself when he got into a little skirmish with Edwards — seems to have resonated with his teammates and earned him some respect.

“Some of the guys, later on they said they just wanted to see what I had,” Gerhart said. “It was kind of a test-the-waters sort of thing because they knew I’d be a guy that was gonna be with them down the road and they wanted to see what kind of guy I was. It was a learning experience to say the least.”