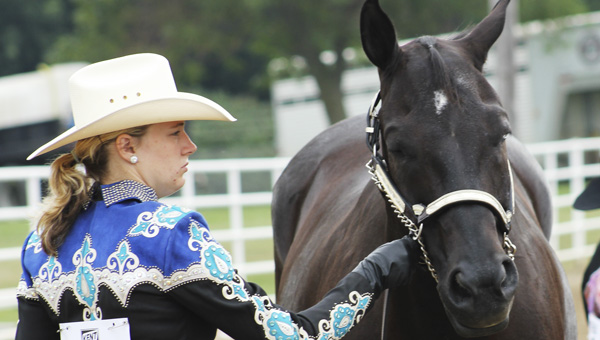 Katie McNab, 18, of Waseca, shows her quarterhorse Friday morning during the halter competition. The horse's name was Blue because it has one blue eye and one brown. -- Tim Engstrom/Albert Lea Tribune

Friday morning cowboys and cowgirls gathered around the Outside Arena to watch the Freeborn County Fair Horse Show that brought multiple breeds of horses to participate in four competition categories including halter, showmanship, light horse riding and game classes.

The cool temperatures and overcast sky gave way to the halter, showmanship, light horse riding and games classes during the horse show. Contestants were clad in their Western or English attire with most of them donning a trademark cowboy hat to show their horses.

Katie McNab, of Waseca, was one of those contestants. McNab was participating in four competition classes including halter, showmanship, English and Western light horse riding.

“I grew up showing horses,” said McNab, who is the acting Minnesota state FFA secretary. “I actually competed in my first show when I was 1 1/2 years old, in diapers.”

Blue was McNab’s 11-year-old horse companion for the show. The brown quarterhorse was given his name because he has one blue eye and one brown eye.

She has been working with him since he was just a couple of years old. Blue was raised on their family farm. McNab said she tries to see him every day.

“We have an understanding with each other. He knows that I am going to take care of him, feed him and provide him with what he needs, and he is going to take care of me,” McNab said. “He respects me and my space when we’re on the ground, and he works with me when I’m riding him to accomplish a common goal.”

Contestants and their horses were being judged by Western Saddle Clubs Association judge Allan Spidahl. The show was also used as a qualifier for WSCA championship shows.

First of the four contest categories was the halter competition. There were classes for the breeds of American Quarterhorse, Appaloosa, Arabian-full and half, and Paint and Pinto breads with an age break down.

McNab and Blue earned second place from their halter showing. McNab said that is good for him in this type of event.

She has been showing Blue all summer. McNab shows every Sunday in an open show circuit from May through September. She usually shows in five classes and finishes in the top five at the year-end awards ranking.

There were also newcomers to the event like 10-year-old Maverick Babcock, of Alden, who was showing Whiskey.

Babcock was thrust into the halter competition after his sister Jolene was unable to show two horses in one competition.

“He got thrown in spur of the moment,” Jolene Babcock said.

When Maverick was asked if he was nervous before the show, all he could say was “a lot” with a smile on his face. He said his favorite part was that the horse was really calm and gentle.

Maverick’s showing specialty is the games competition. He usually practices with the games and poles at least twice a week with his 1-year-old horse Vodka at home. Vodka is Whiskey’s daughter.

He said he thinks he’ll be doing this again sometime.

The second category of competition was showmanship. In this competition the contestants led their horses through the completion of a pattern that consists of walking, trotting, stopping, backing up and turning. The duo is judged on how well they work together and how good the pattern looks.

In the light horse riding class there are two different disciplines on center stage. The English discipline is broken into two categories of English pleasure, which is how well the horse moves in the English class. The other area of focus was English Equitation, in this category they are judged on how well the contestant works with the horse.

“English is a faster movement that is more extended with a forward motion,” McNab said.

McNab said the other discipline is the Western class. This area is broken down into a pleasure class and a Western horsemanship class. She said Western is just slower and smooth.

The final class of competition was the game classes, where competitors would show their skills in pole weaving, jumping, and barrels.

McNab said that there is preparation involved right up until show time with the horses.

“I try and get one more practice in, I wash him, clip the extra hairs around the bottom of his feet and the whiskers on his face,” she said.

She also has to make sure her clothing is clean.