Funeral services for Inga R. Laursen, 105, of Albert Lea, will be held at 10:30 a.m. Wednesday at Bayview/Freeborn Funeral Chapel. The Rev. Andrea Myers will officiate. Interment will be at Hillcrest Cemetery. Visitation will be one hour prior to the service. To sign the guest book, go to www.bayviewfuneral.com 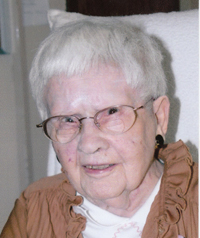 Inga R. Laursen was born on June 10, 1906, in Manchester to Mr. and Mrs. Gisle Grasdalen. She graduated from Albert Lea High School and took a short business course thereafter. Inga worked as a stenographer for Wilson & Co. In 1931 she married Mildner N. Laursen, who preceded her in death in 1978. Inga was active at Grace Lutheran Church teaching Sunday school and working with the Altar Guild for a number of years. Inga was a very loveable person, liked by everyone.

Inga was preceded in death by her parents, her husband Mildner, and her sisters and brothers.