It costs more to borrow and spend 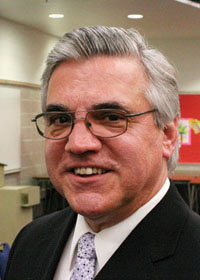 On Sept. 6, 2011, thousands of public school buildings will open their doors for another school year. Schools are focused on providing a quality education for all students that are only in school 15 percent of the year. The other 85 percent of the year they are under the direct supervision of their families.

One has to wonder if it is better public policy to borrow and spend as compared to simply tax and spend. You see, it costs many more millions to borrow and spend. The state of Minnesota now owes $2.1 billion to local public schools due to the actions of the past two state legislative sessions’ inability to honestly balance their budget without using tax and funding shifts that will end up costing local school districts millions in borrowing costs.

It is inappropriate to claim that government should be run like a business and then cook the books to falsely claim that the state government has balanced their budget. The education systems in Minnesota deserve better than this.

In preparation of the upcoming school year, the Fairmont Independent School District reduced our expenditures by $1.5 million though the process of eliminating 40 jobs. This will result in a balanced budget for the current school year. As we look to future years, we will need to increase our revenue in order to maintain our current comprehensive school district, explore additional curriculum areas and to expand our unassigned fund balance. This is why we will be seeking voter approval to increase our operating levy from $500 per student to $1,250 per student on Nov. 8, 2011.

(Note: At least 130 school districts are seeking operating levies this year in Minnesota due to the lack of adequate funding and due to the state borrowing 40 percent of state aid as a method to balance their budget.)

When I moved my family of six children and spouse to Mankato in 1993 I was pleasantly surprised when I met with my State Farm Insurance agent in order to insure automobiles and home. My automobile insurance rates were 50 percent less than what I was paying in the other three states I had previously resided in: Iowa, Illinois and Pennsylvania.

I am a firm believer that the only way our country, state and local regions can actually balance our budgets is by investing in high quality education: public schools, private schools, charter schools, online schools and home schools to ensure that all students have access to a quality educational experience.

I propose that Minnesota implement a five-year plan where we reduce social welfare costs by 20 percent per year and shift this revenue over to schools. There would still be millions available to assist our most physically and mentally handicapped citizens. Any person currently on welfare would be strongly encouraged to obtain a higher level of education so that we could reduce their dependency on welfare.

This is a practical proposal to promote public policies that will make our society stronger and less dependent on government.

Joseph E. Brown Sr. is the superintendent of the Fairmont Independent School District and resides in Freeborn County. He is a member of the Freeborn County DFL Party.