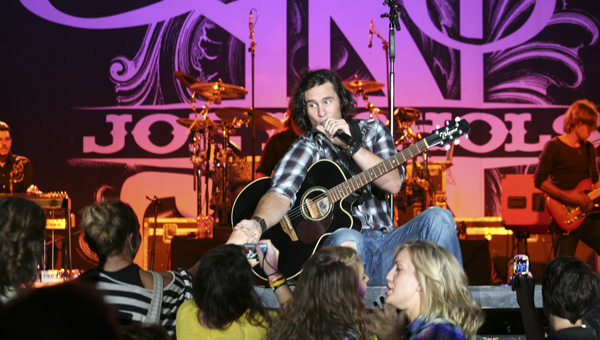 Joe Nichols meets the crowd at the end of the platform as he performs at the Freeborn County Fair. -- Garrett Wampler/Albert Lea Tribune

Nichols brought the vocals and The Damn Band Randy provided the tunes that electrified the crowd in the standing room only Grandstand area. Lines for the entertainment began forming around 6 p.m. for the 8:30 p.m. show. 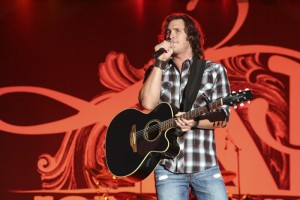 “Thank you all for inviting us back out to Minnesota,” Nichols said. “We’re really glad to be here tonight, thank you for coming out here.”

The Show Dog-Universal Music artist began the night by walking onto the stage singing “What’s a Guy Gotta Do,” which was once fourth on the Billboard country music charts and immediately spun into another of his top 10 hits, “Size Matters.”

He than performed the second single he ever recorded, which was also his first No. 1 hit on the Billboard country charts, singing “Brokenheartsville.”

Nichols took a quick break after the first three songs to talk to the crowd and then played his most current hit single “Take It Off.”

“This is a song my mother is really proud of,” Nichols said. “She just loves when I put out those naked songs.”

The country music performer then told the crowd he would like to play some of the songs he grew up around that inspired him. Nichols proceeded to play “Baby Got Back” to a country tune.

“She Only Smokes When She Drinks” was the next hit song Nichols performed. He got the crowd off their feet and had them waving cell phones and lighters in the air.

The most popular song of the week wasn’t left out as Nichols joined Tuesday’s performer Jerrod Niemann by also singing “Family Tradition” made famous by Hank Williams Jr. 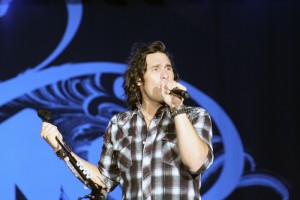 Country singer Joe Nichols performs on the Grandstand at the Freeborn County Fair on Friday night.

Nichols followed the old tracks with his No. 7 and No. 3 hits on the country charts with “I’ll Wait For You” and “The Impossible,” respectively.

He took a moment to thank another country singer for making “Who Are You When I’m Not Looking” a hit after Nichols originally recorded the song in 2007.

“My record label said it wasn’t a hit,” he said.

He said he’d like to thank Blake Shelton for helping prove them wrong. Nichols said he found out that rock group Nickelback had been playing his popular song “Tequila Makes Her Clothes Fall Off” at their concerts and said he would return the favor. He then belted out a country tune of Nickelback’s “Rockstar.”

The night seemly ended to “It Ain’t No Crime” and “Gimme That Girl” but Nichols and the Damn Band Randy returned for an encore which featured “One Woman Man” and his trademark tune of “Tequila Makes Her Clothes Fall Off.”

Nichols concluded the night by meeting fans after the concert.