One of the nearly forgotten aspects of Albert Lea life could be based on a local firm that once supplied equipment for campers and sportsmen. That firm was the American Gas Machine Co., once located on East Clark Street where the City Center is now, and on West Front Street in the Lou Rich building. 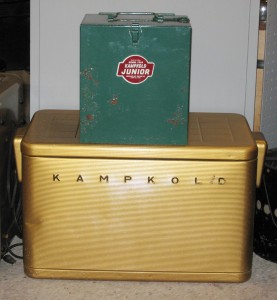 The Kampkold on the bottom and the Kampkold Junior on top were coolers once made in Albert Lea. These units were made of steel and heavier than the coolers now available which feature plastic on the exteriors and foam materials for insulation.

This firm created many products based on using gas, gasoline and kerosene for heating, lighting and cooking purposes. And the one line of locally-made products for use by campers and sportsmen about six to eight decades ago had brand names which used the gimmick of substituting the letter k for c.

For example, there was the Kampkook. One of the firm’s literature items said, “The American Kampkook is America’s favorite camp stove. Used by more campers than all others combined.”

This particular stove originated in 1911 and was gradually improved through the years. There were several versions with one, two and three burners. The fuel used for the cooking burners was untreated (regular) gasoline. According to a 1930s catalog, this line of portable camp stoves was very popular with what were then called “motor campers.”

The smallest of these stoves was called the Speedikook. It had one burner, 7 inches high, weighed 5 pounds, and reportedly held enough fuel for nine to 10 hours of usage.

There were several patented features for these stoves. Those details included folding windshields and detachable legs and fuel tanks. 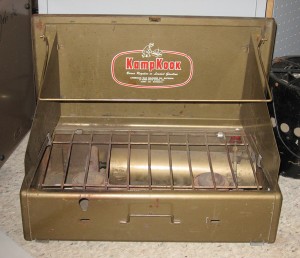 The Freeborn County Historical Museum on North Bridge Avenue has a large display based on the products once made in Albert Lea by the American Gas Machine Co. One of those items in this display is a two burner Kampkook stove.

American Gas claimed their small stoves were so safe that they could be used in forest locations where open camp fires were prohibited. One of the most convenient features for the Kampkooks was based on how they could be folded up with everything inside the outside portion and carried from place to place like a suitcase.

These stoves could be placed on a tree stump, chair or picnic table for usage. Also, American Gas created a folding stand designed to bring the stove up to working height. As a bonus, the firm developed a cast iron fry pan with a folding handle.

Another line of products for campers and sportsmen was based on the Kampkold label. The firm’s literature said it was America’s number one portable ice box and that “Kampkold is needed by every sportsman — to take lunches, cool drinks on fishing trips and to keep fish in good condition on the way back. It refrigerates like a home icebox — container keeps ice from sides and bottom. Thoroughly insulated. Ten pounds of ice last 30 hours in 80 degree outside temperature.”

A smaller version of this product was called the Kampkold Junior and labeled as a midget ice box. It could hold up to eight beverage bottles or a good portion of a picnic lunch. 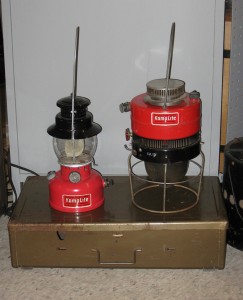 Still another line of products created by American Gas Machine Co. and intended for use by campers and sportsmen years ago were the Kamplite gas lanterns. These two units are now part of a display at the Freeborn County Historical Museum.

After this war ended in 1945, the firm wasn’t quite able to convert its line of camping products back to civilian usage. And in 1950 this firm became a part of Queen Stove Works (later King Seeley-Thermos).

Now the American Gas Kampkooks, Kampkools and Kamplite lanterns are just reminders of a past era for campers, sportsmen, travelers and picnickers.